The Green Machine: Photosynthesis as the Engine of Life

The photosystem II reaction center (PSII-RC) is a model system to understand the initial steps of photosynthesis, but its excited state dynamics is difficult to disentangle with most spectroscopic methods. Here the authors perform a two-dimensional electronic-vibrational spectroscopic study of PSII-…

Photosynthesis is the process by which organisms can use sunlight, water, and carbon dioxide to form sugars and oxygen, both of which are essential to life on Earth. Our goal is to determine the design principle used to initiate nature’s most important reaction – water splitting. Oxygen is formed when organisms use sunlight as energy to split water into protons, electrons, and oxygen gas – the protons and electrons later being used to drive the production of ATP for later use in making sugars. Charge separation is a key component to making energy – something we will need quite a bit more of as our populations and energy demands increase. With improved understanding, we could potentially use our knowledge to create better artificial devices to convert sunlight – an abundant resource – into clean and stable energy, replicating what nature has spent billions of years perfecting.

This engine has a lot of moving parts, so we decided to study one of the smallest units that can undergo charge separation – the photosystem II reaction center (PSII-RC). The reaction center consists of two special pair chlorophylls (P D1 and P D2), two accessory chlorophylls (Chl D1 and Chl D2), two pheophytins – chlorophylls missing the central metal ion – (Phe D1 and Phe D2). There are also two peripheral chlorophylls (Chlz D1 and Chlz D2). Despite the apparent symmetry of the branches, electron transfer only happens along the D1 branch, which should further “shrink” our system complexity; however, it is not that easy. Part of what makes photosynthesis so efficient is that energy is funneled with minimal loss from more external pigments to the special pair chlorophylls. To do this, the excited states involved are close together, which makes them difficult for scientists to distinguish, hindering our ability to track the energy as it moves through the system.

If you are going to study how exactly the energy and electrons move in the reaction center, you need a technique beyond absorption, as even this “small” unit has a lot of overlapping excited states. In our study, we use two-dimensional electronic vibrational spectroscopy (2DEV), a technique we developed in our lab, which allows resolution along both the excitation (visible) and the detection (infrared) axes. In 2DEV, we use visible light to excite molecules to a higher electronic energy level and then probe the vibration at that electronic level with an infrared pulse. 2DEV is particularly useful when the electronic states are very close together (as with most photosynthetic systems), as the infrared probe provides an extra dimension to distinguish the species involved.

While scientists know that the electron transfer in PSII RC moves only along the D1 branch, the specifics of the charge separation are still not fully understood. Is the initial electron acceptor P D1? Or Phe D1? We set out to answer this question with our experiment.

We find that the vibrational structure of PSII RC is highly dependent on the excitation frequency, which makes the deconvolution of these excitonic states possible. We find that the charge transfer state can be directly prepared via excitation. The initial electron acceptor is Phe D1, independent of the excitation wavelength. Hole transfer occurs from Chl D1 to the special pair (P D1)(P D2), rather than being initiated at the special pair as it is in bacterial reaction centers.

To determine the dynamics occurring in PSII RC, we used a global analysis of the data with sequential modeling, which broke down into five components (35 fs, 1.3 ps, 6.3 ps, 41 ps, and a component longer than the duration of the experiment). The 35 fs component is below the time resolution of our experiment so it will not be assigned. The 1.3 ps timescale corresponds to the time it takes to fully charge separate across Chl D1 and Phe D1. On a 6.3 ps timescale, the hole moves from the accessory chlorophyll Chl D1 to a more delocalized state across the special pair chlorophylls (P D1 and P D2) and Phe. The final component, at 41 ps, represents the slower charge separation limited by electronic energy transfer from the peripheral Chlz to the reaction center pigments.

While we have been able to assign the initial electron acceptor as Phe D1, there are still questions left to be answered. The PSII-RC is only one part of the machine, even if it is a vital one. Further work must be done to scale up the process, adding components until we understand how every part of the machine works when in its natural system. By investigating the fundamentals of such a property, we can improve the design of artificial devices that could use sunlight to create the energy needed for our future.

Interested in learning more? Check out the full article in Nature Communications here.

I study photosynthesis - biological and artificial - with multidimensional spectroscopy and quantum light spectroscopy. 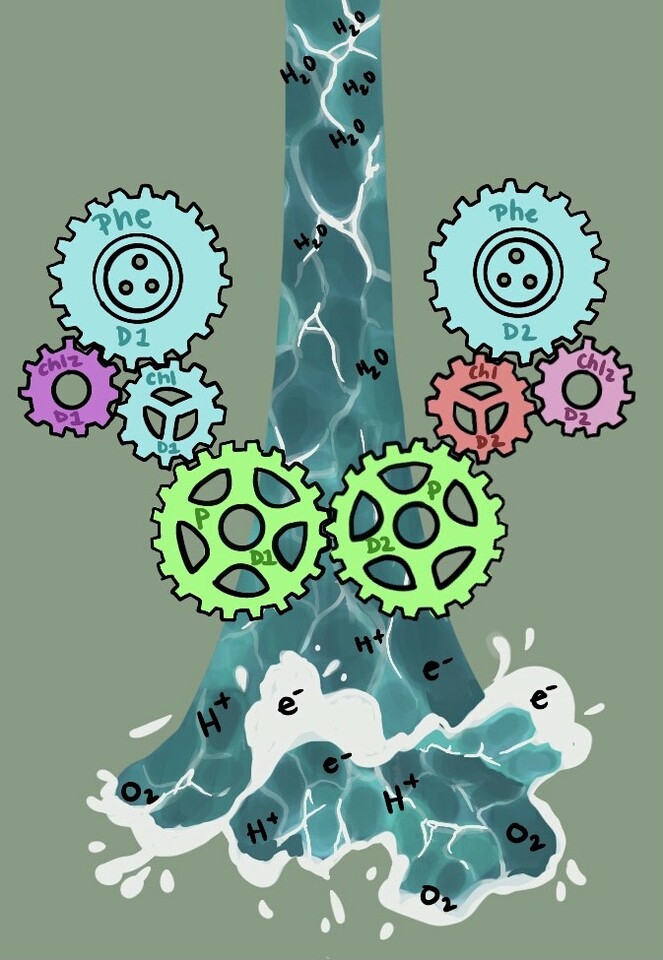 The Green Machine: Photosynthesis as the Engine of Life