The occurrence of ansamers in the synthesis of cyclic peptides

We have answered the long-standing question for the existence of previously termed atropisomers in the amatoxin family. We propose the term ansamer as a better fit, to unambiguously and easily describe as well as assign the stereochemistry of bridged bicyclic peptides and related systems.
Guiyang Yao, Simone Kosol & Roderich Süssmuth
3 contributors
Like Liked by Evelina Satkevic and 4 others
4

The occurrence of isomers of the bicyclic octapeptide α-amanitin, which presents a macrolactam with a tryptathionine cross-link forming a handle, has been reported under the term of atropoisomers. Here, the authors synthesize its analogs and analyse their isomers, proposing and describing for them t…

The Amatoxins and Phallotoxins are two peptide toxin families isolated from the death cap mushroom Amanita phalloides. Amanitin is a highly potent RNA polymerase inhibitor currently used as a payload for antibody-drug-conjugates in clinical phases of cancer therapy.[1] Amatoxins and phallotoxins have a unique bicyclic structure (see figure 1) with a tryptathionine bridge located above a macrolactam ring, resembling a handle above an imaginary plane. In previous synthetic and semi-synthetic studies by Wieland and co-workers, the occurrence of amatoxins with the same amino acid composition but different physico-chemical properties has been suspected and termed atropisomers.[2,3] For some derivatives CD[3] and NMR spectra[4] were recorded and combined with molecular dynamics (MD) simulations but epimerization of amino acids as an alternative explanation could not be unambiguously ruled out.[5] Previously, we accomplished the total syntheses of phalloidin[6] and amanitin[7,8] and presented a systematic structure activity relationship study of amatoxins.[8] However, the longstanding question on the existence of atropisomers further remained unsolved.

We used Ile3-S-deoxo-amaninamide (amanullin) as a simplified model system to screen for optimal macrolactamization sites employing HATU or EDC/HOAt as coupling reagents. In several of our syntheses, we obtained two products (4a and 4b) with identical molecular mass. This triggered an in-depth analytical investigation by Marfey amino acid analytics, X-ray crystallography, NMR and CD spectroscopy which clearly confirmed the presence of two different configurational isomers and we were able to exclude epimerization of amino acids (Figure 2). Moreover, we were able to show that not only is the location of the tryptathionine bridge inverted but the overall conformation of 4a and 4b is drastically different from each other. MD simulations of 4a and 4b and a monocyclic precursor 3b showed that the pre-organization of the intermediate plays a key role for the isomer formation.

Figure 2 Crystal structures (a) of 4a (left) and 4b (right). The A-ring and B-ring are coloured grey and blue, respectively. The tryptathionine bridge is shown in red. Analysis of the two isomers 4a (purple) and 4b (orange) with UV (b), CD (c) and NMR (d) spectroscopy.

The crystal structures of 4a and 4b with the tryptathionine bridge on opposing sides of the macrolactam ring, raised the question of the type of isomerism: Previously, peptide isomerism has been furnished with various terms, e.g., in/out isomerism,[9] norbornapeptides,[10] akamptisomers[11] and non-canonical atropisomerism[12] (Figure 3). This has led to some controversy to accurately describe these pairs of isomers. The herein presented amatoxin-type bridged cyclic peptide structures are not appropriately described as atropisomers since interconversion of the two isomers cannot be attributed to the rotation around a hindered single bond. Therefore, we propose the term ansamer to describe stereoisomers with a handle, which determines the configuration of these stereoisomers (the assignment of the stereochemical descriptor can be found in our paper).

Figure 3 Several nomenclatures have been proposed to describe the isomerism of peptides displaying ring systems.

The poster image exemplifies the ansamer terminology: A viewer standing on the bridge and looking into the pond will see fish swimming in the preferred direction, which is clockwise and equals Pansa. An imaginary viewer standing on a bridge beneath the plane of the pond, one would see the fish swimming counter-clockwise, which equals Mansa. It has to be taken into account however that the ansamers do not necessarily behave like mirror images. Since only the natural ansamer has been isolated from death cap mushroom, we propose that the biosynthesis of amatoxin is Pansa selective. We furthermore found, that the ansamer terminology can easily be applied to other peptide-type structures, such as the norbornapeptides, trypotrubins and even lasso peptides in order to unambiguously describe their structural arrangement.

Per-Ola Norrby
about 1 month ago

Interesting, and I agree that "atropisomer" does not describe this behavior, but how about planar chirality? This looks very much like the behavior you see in planar chiral cyclophanes, such as the chiral ligand Phanephos (https://en.wikipedia.org/wiki/Phanephos). We should not introduce new terms if there are existing terms that could be made to cover the new observations.

Simone Kosol
about 1 month ago

Thank you for your comment. This is a very good point and it was the similarity to chiral planarity, and specifically to chiral ansa-metallocenes, that inspired our suggestion of the term “ansamer”. If an accurate description of the isomers is possible with existing terminology, it would be preferable to use these existing terms. In this case, because the two amanitin isomers are not enantiomers, chiral planarity does not describe the behaviour accurately and we have to look for another term.

Per-Ola Norrby
about 1 month ago

I guess it was obvious from my comment that I did not scrutinize the paper, I commented on the post here. Just one more point: as with all planar chirality, it specifies one chiral element. Since you also have plenty of stereogenic centers in there with defined stereochemistry, the additional chiral element make these diastereomers. This is the same as for other planar chiral molecules with additional stereogenic centers, such as Josiphos. I'm sure you know this, but to clarify to other readers of the comments.

Roderich Süssmuth
about 1 month ago

We appreciate your comments, no problem at all. Indeed, the fact that this is a Peptide with many stereocenters makes things a bit more complicated….. regards Roderich 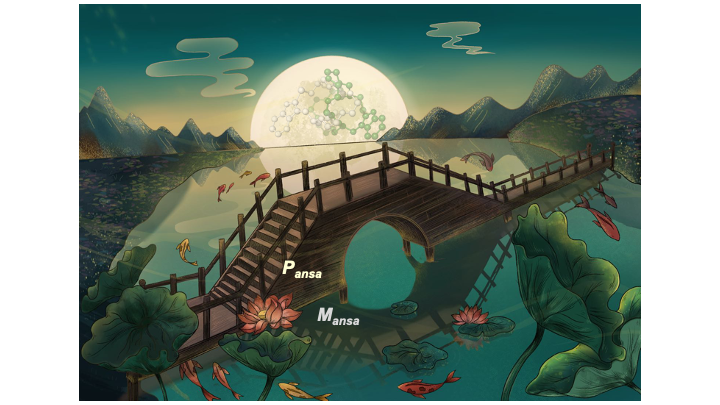 The occurrence of ansamers in the synthesis of cyclic peptides

We have answered the long-standing question for the existence of previously termed atropisomers in the amatoxin family. We propose the term ansamer as a better fit, to unambiguously and easily describe as well as assign the stereochemistry of bridged bicyclic peptides and related systems.