Copper-based catalysts are traditionally very effective for the hydrogenation of CO2 to methanol, although control over the active site has remained elusive. Here, the authors design a Cu1/ZrO2 single-atom catalyst featuring a Cu1–O3 site responsible for a remarkable performance at 180 °C.

The massive burning of fossil fuels in recent decades has led to a dramatic increase in CO2 greenhouse gas emissions, which has led to serious environmental problems, including global warming, sea level rise and ocean acidification1. Therefore, it is urgent to find an effective way to alleviate this severe situation. One of the most promising ways to solve above problems is to take CO2 as the carbon source and convert it into high-value-added chemicals through catalytic reaction. It can not only significantly reduce the excessive emission of CO2 greenhouse gases but also effectively alleviate the energy crisis2, 3, 4. As a basic chemical raw material, methanol can be used to synthesize chemical products with higher value, such as dimethyl ether5 and low-carbon olefin6. It can be seen that the conversion of CO2 to methanol has very important industrial value. Therefore, in the past few decades, researchers have done a lot of work to find catalysts with high catalytic performance, including metal-metal oxide catalysts7, metal-oxide solid solutions8 and metal alloys9.

Among CO2 hydrogenation catalysts, copper-based catalysts have been widely studied due to their excellent performance and low price10. However, it is difficult to identify its real active site precisely due to the complex structure of Cu-based catalysts. The variable valence of copper species and the reductive reaction atmosphere means copper species are likely to exist in the form of mixed valence states during the reaction process. There are conflicting reports in the literature suggesting that Cu0, Cu+ or Cuδ+ may be the active center of the reaction11, 12, 13. In addition, different particle sizes of copper species also significantly affect its catalytic performance14, 15. These different factors have a great influence on the coordination structure of the copper itself, which makes it difficult to study the actual active copper site in CO2 hydrogenation. Despite substantial progress in understanding the active site of copper catalysts, there is still much controversy regarding the structure-property correlation between catalysts and reactions.

For the above reasons, it is essential to find a copper-based catalyst with a clear and stable structure to further study the potential relationship between catalysis and activity. As reported, the single-atom catalyst is an ideal model for the structure-activity relationship because of its definite active structure16. However, the literature on single-atom catalysts for heterogeneous thermal catalytic CO2 hydrogenation to methanol is very scarce.

Here, we designed and prepared a stable single-atom Cu-based catalyst (Cu1/amorphous-ZrO2) for hydrogenation of CO2 to methanol at low temperature (180℃). Compared with the traditional Cu-Zr catalysts, the single-atom Cu-Zr catalyst showed a higher TOF value for methanol and 100% methanol selectivity. Excellent activity usually comes from the unique structure of the catalyst, and the results of fitting X-ray absorption spectra and advanced theoretical calculations (walking surface potential) show that the single-atom catalyst has a Cu1-O3 quasi-planar structure during the reaction, and the Cu species are still in the cationic state (~1.4+). Moreover, the structure of the active site is very stable, and in terms of activity, no obvious deactivation was found after 100 hours of reaction. With the increase of Cu loading, the catalytic performance of the samples and the coordination structure of copper species are changed at the same time. It was finally determined that the Cu1-O3 site of copper was the only active site for methanol synthesis in the low temperature reaction condition, and the nanoclusters and nanoparticles were active sites for CO formation, while larger copper particles have no activating ability for CO2. The schematic diagram is as follows:

Studies have shown that the gases used in the pretreatment or reaction process greatly affect the structure of catalysts, including active species migration. In our catalytic system, the internal copper species gradually migrate to the surface of the catalyst during the reaction. The migration phenomenon is more obvious in the samples with high Cu loading, which may be the reason for the long activation period of the reaction.

The characteristic geometry and unique activity revealed in the copper single-atom catalyst provides a deep understanding of copper-catalyzed CO2 hydrogenation and will guide future applications of single-atom catalysts in thermal catalytic CO2 transformations. 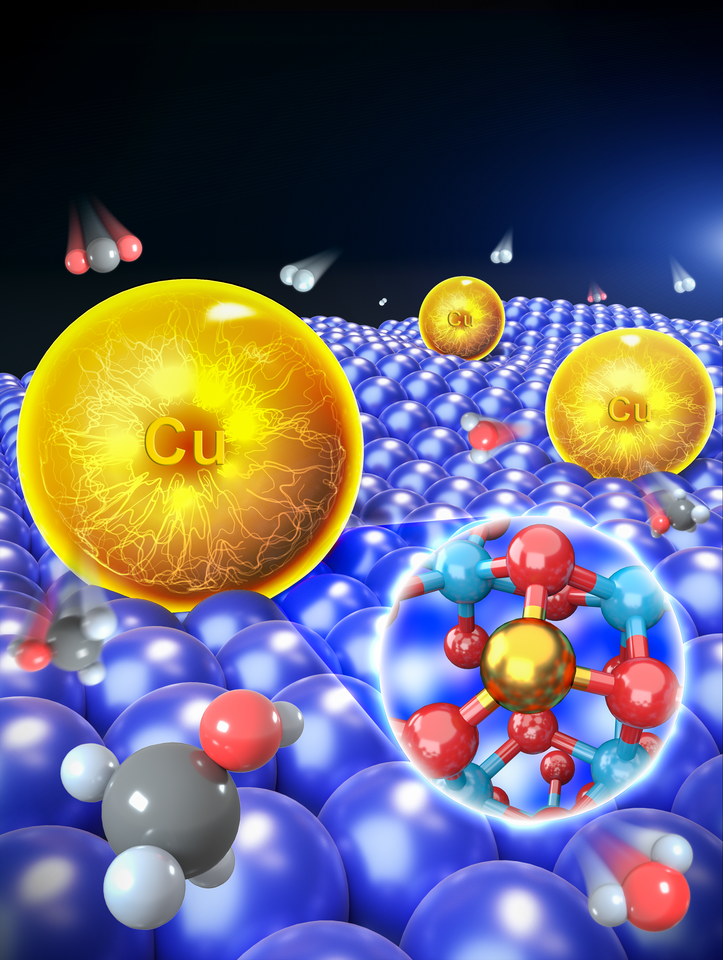