For about ten years, we, the groups of Harald Fuchs and Armido Studer, have been working interdisciplinary in two-dimensional space towards the disclosure of unprecedented surface mediated reactions. Over the years, the collaboration with the group of Johannes Neugebauer got more and more intense, as theoretical expertise was essential to investigate all facets of polymerisation on surfaces. Now, the silane has landed.

Fig. 1 | Schematic representation of the different fields of expertise participating in this collaboration towards the formation of silane-silane bonds on surfaces.

In the early years of this collaboration, all members had to learn from each other and some ‘pediatric diseases’ had to be overcome. But soon, we found a rhythm that allowed us to use our different backgrounds synergistically and design projects that would have been beyond the mind of a pure chemist or physicist. Along these lines, the first milestone accomplished in 2013 should be mentioned.1 In this paper, we described the on-surface Glaser-coupling on Ag(111) and Au(111) surfaces as observed by scanning tunneling microscopy (STM) that has found great attention in the field (Fig. 2a). We and other groups were able to exploit the potential of this type of dehydrogenative coupling of alkynes for the construction of 2D materials building upon these results.

Even though the wide applicability of the Ullmann-coupling and its impact on the field are inarguable, we always tried to extend the toolbox of the on-surface chemist. Therefore, the starting point of a new project was the hitherto unidentified reactivity of a functional group to ultimately develop novel pathways that give access to unprecedented structures. Our focus especially laid on functional groups that could cleave volatile by-products to construct polymers on a clean surface under ultra-high vacuum conditions. In an early work, we were able to use this approach in the development of a reaction series of aromatic carboxylic acid derivatives on coinage metal surfaces.2 Importantly, we were able to identify the different intermediates of the reaction that comprises up to four different species depending on the surface type. In a similar approach, we were able to identify α-diazo ketones as readily available and highly reactive building blocks for a reliable and selective on-surface reaction series (Fig. 2b).3 Upon deposition, this class of monomers can cleave dinitrogen at low temperatures yielding copper-biscarbene complexes. Those carbenes will couple as the temperature rises and thus polymerise to an arene-butenedione copolymer. The latter part can be cyclized at even higher temperatures to furandiyl connected poly-phenylenes.

Fig. 2 | Surface polymerisation reactions developed by us in the recent years. a, Glaser coupling. b, Coupling of diazoketone derived carbenes. c, Redox cross coupling of nitroarenes and arylamines.

This interesting behaviour of a distinct functional group along a hydrocarbon backbone opened our eyes and incited us to follow a novel pathway in the development of new reactions: so far rarely described carbon-heteroatom and even rarer heteroatom-heteroatom bond formation reactions were targeted in the next stage of the collaboration to contrast the common carbon chauvinism in on-surface chemistry. We don’t want to overflow this blog with citations, but it should at least be mentioned that we were able to identify new reactions for the formation of O−O, C−N and just recently N−N bonds. The latter coupling was accomplished at best in a system of two different functional groups – a rather seldomly utilized approach in the field. Nitro and amino groups were found to engage in an efficient formation of azo groups on the silver surface and long azo bridged polymers were formed (Fig. 2c).4

As a logical consequence, the next sophisticated milestone to be reached was the on-surface formation of silicon-silicon double bonds. For this purpose, we first started to investigate hydrosilanes with two methyl groups attached to silicon and an aromatic backbone prepared in the labs of Armido Studer to assess the reactivity of this unexplored type of compounds. Also, different linkers between the arene and the silane moieties were investigated by the group of Harald Fuchs, but most of the molecules only desorbed from the surface or formed undefined structures. In one case however, we found a hit: a biphenyl-disilane (referred to as DMS in the original paper, see Fig. 3) was found to engage in a Si−H bond cleavage reaction on the surface. This finding motivated us to explore other biphenyl-disilanes and thus a dihydro- and the trihydrosilane were prepared. This small variation of the silicon functional group turned out to be a game changer. Both molecules (AMS and BDS, see Fig. 3) underwent clean and efficient polymerisation reactions already at mild annealing temperatures. In both cases, three substituents were visible at the silicon atoms in the STM image: one aryl residue, one neighboring silicon atom and either the remaining hydrogen atom or methyl group. On the basis of this evidence, we couldn’t but conclude that we successfully prepared poly-disilenes. But naturally, we had to find more evidence to support the structural assignment.

Reaching out to the group of Johannes Neugebauer turned out to be the second turning point of this study, as they provided evidence that we were misguided by our expectation. The collectively designed model compounds were optimised by means of DFT methods at the respective surfaces which revealed that the weak silicon-silicon double bonds react with them. This leads to a single bond between the - now fourfold coordinated - silicon atoms with an additional bond to the surface. We were able to identify a model for all observed structures by structure optimisation, distance measurement as well as STM simulation and further support was contributed by surface spectroscopic analysis. Shedding light on the reaction mechanism by a broader DFT investigation of possible intermediates completed the study. Another cherry on the cake was provided by switching to another surface analytical method: Atomic force microscopy (AFM) with a copper-oxide terminated tip, a dedicated method which uses passivation of the tip apex to image with drastically increased resolution, allowed locating the hydrogen atoms involved in the binding sites of the disilanediyl moieties.5 This further strengthened the correct structural assignment. 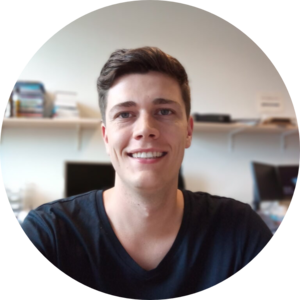