Operando investigation of the CO2 reduction mechanism at gas diffusion electrodes is a challenging task. Here proton-transfer-reaction time-of-flight mass spectrometry has been deployed to analyse the intermediates and products at copper electrodes in real time.

Unraveling the pathways linking reactants and products in complex reaction networks is a perennial challenge for researchers, as we found while studying electrochemical CO2 reduction (eCO2R).

Electrocatalytic reduction of CO2 is a promising pathway to the more sustainable production of chemicals and fuels and could, if successful, replace the petrochemical processes which are now used. However, eCO2R has proven exceedingly difficult to control. Prototype reactors produce a mixture of C1-C4 hydrocarbon and oxygenate products; separation of the desired products from this mixture will be costly. To improve selectivity, we need to understand the formation pathways for the desired products so that we can create more selective catalysts. However, this is a tall order: just considering the C2 and C3 products, there are over 18 possible intermediate species and many different possible reaction pathways.

Nevertheless, we sought to shed some light on eCO2R reaction network by operating a prototype reactor under industrially relevant conditions, generating, as expected, a mixture of different products. Crucial questions immediately arose.

We turned to other complex reaction networks for clues, notably photosynthesis, which has evolved over billions of years to fix CO2 and generate, very selectively, the molecules of life. The work of Melvin Calvin was particularly inspiring [1]. Calvin used an isotopically labeled tracer, 14C, to learn the order in which intermediates appeared in the cycle now named for him (and was awarded the Nobel Prize in 1961). We reasoned that we might be able to use isotopic labeling in an analogous way for eCO2R.

However, we faced another problem. Electrochemical reactions are much faster than photosynthesis. Also, we did not want to use radioactive 14C. We then looked more deeply into the photosynthesis literature and learned about a very interesting phenomenon in plant primary metabolism. Photosynthesis fixes 12CO2 at a slightly faster rate than 13CO2  [2]. The 13C discrimination is quantified as δ13C, representing the change in the ratio of 13C to 12C (n.b. natural abundance of the stable 13C isotope is 1.1%). For an irreversible reaction, breaking or making a bond involving 13C is less preferred than 12C in climbing the reaction energy barriers, thus resulting in 13C-depleted products. Thus, triose-phosphates produced in chloroplasts are 13C depleted (negative values of δ13C) compared with atmospheric CO2. We also learned that δ13C measurements have been used not only in the study of plant primary metabolism, but also in geosciences, climatology, and oceanography.

Turning to the system of interest to us, eCO2R, we would expect and were excited to observe discrimination against 13C in the products (negative values of δ13C) as elementary steps in eCO2R are irreversible. Moreover, as we expect the largest kinetic isotope effect at the C-C coupling steps, we were able to group products sharing a given pathway by their δ13C values. In simple terms, a product and its major intermediates with the same number of carbon atoms would be expected to have similar values of δ13C, allowing us to deduce key relationships in the chemical network.

Drawing inspiration from its use in atmospheric sampling [3], we applied operando proton-transfer-reaction time-of-flight mass spectrometry (PTR-TOF-MS) for real-time detection of intermediates and products as well as their 13C isotopologues during eCO2R. We encountered a few hurdles in doing so. Surprisingly, the technique can be too(!) sensitive; we found we needed to dilute the product stream from our reactor to stay within the useful dynamic range of the instrument. Ultimately, we were able to establish unambiguous identification of dozens of C1-C4 species by unique m/z values by coupling the PTR-TOF-MS to gas chromatography (GC). Importantly, due to the extreme sensitivity of PTR-TOF-MS, we only need to use a natural abundance feed of CO2 (1.1% 13C) rather than expensive 13C or 14C-labelled CO2.

Our operando measurements were used for mechanism evaluation in two ways. First, by slowly scanning the potential to more negative values, we can precisely determine the onset potential for volatile minor and major products. Second, we tracked δ13C through the chemical network. For all products, we observed a negative δ13C, which is also the case for the CO2 fixation reactions in photosynthesis and Fischer-Tropsch synthesis. An unexpected finding is that the values of δ13C in eCO2R are much more negative. Using these two approaches to analyze the operando results of different GDEs under different electrochemical conditions, we find that formaldehyde and acetaldehyde are not the major intermediates for the formation of methanol and ethanol/ethylene, respectively, and that propionaldehyde reduction is on the major pathway for 1-propanol formation.

Looking forward, we envision that use of δ13C measurements can be used to determine the intermediate pathways from reactants to products in other complex reaction networks involving carbon. It may also be possible to extend our method to a wider range of elements, as well as a wider range of fields.

So, when you are baffled by the heaps of products and intermediates and the many possible reaction pathways, how about considering δ13C?

Thanks to all the co-authors, and in particular Prof. Joel Ager, for their enormous contribution to this work. 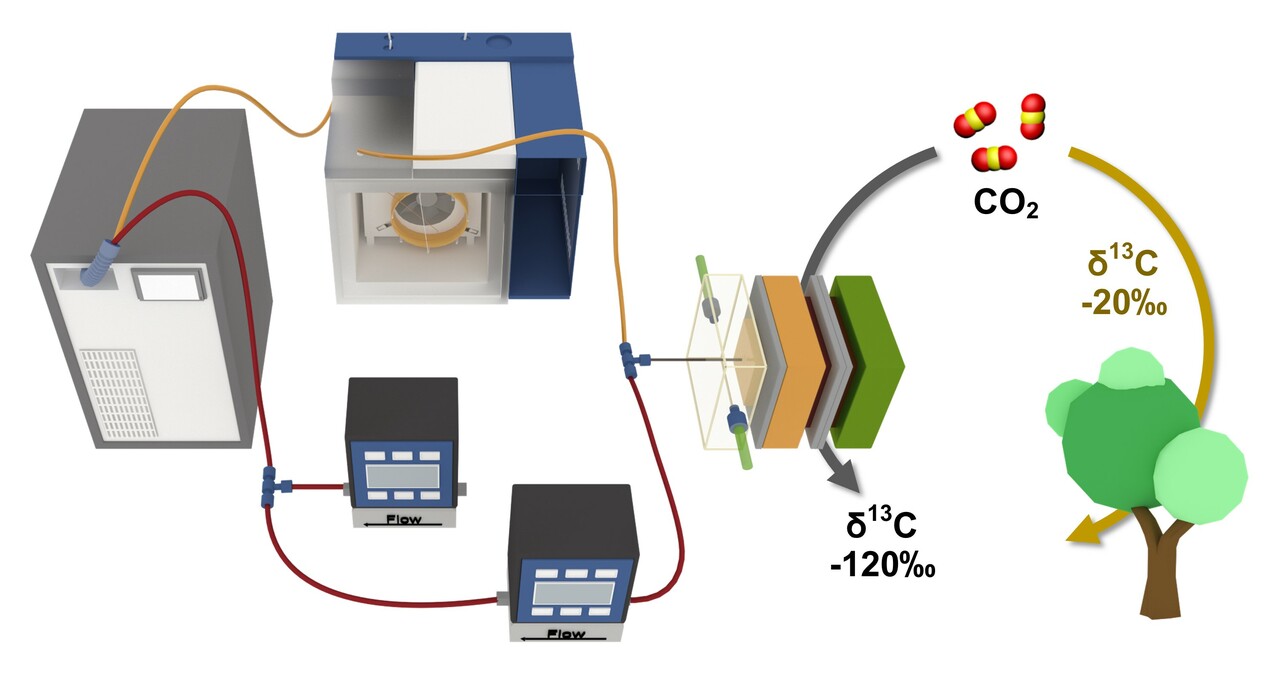