The story began with a small accident in our lab.

Alkali metal battery is one of research fields in our lab. Usually, to get a flat and smooth potassium metal electrode, a piece of potassium metal is cut from the bulk and then flattened between two stainless steel wafers by an oil press. One day, Chichu told me a small blast happened in the glovebox and we need to repair the oil press costing ~150 $. I was sad for 150 $ but more curious about how the blast happened, as Argon was used as protective atmosphere in the glovebox. After checking, we found that with a PTFE film used to separate the K metal and the stainless steel wafer, a violent reaction happened between the potassium metal and PTFE if a pressure was applied. After the reaction, the PTFE film was completely blasted, and the K metal directly contacted with the upper stainless steel wafer. At the same time, the PTFE part from the oil press was also heavily melted and corroded which means a lot of heat was generated. It is interesting that PTFE is generally considered to only react with molten alkali metals and gaseous fluorine at high temperature and high pressure1. We have repeated this reaction under different conditions to make sure what happened. In this case, only an inducing force is needed to start the reaction without any other physical and chemical processes.

We want to know how the reaction happens and if we can make use of it. Interestingly, after the reaction, there was a uniform and rigid layer on the surface of K metal, so, can it be a protective layer to get a water-oxygen stable anode? Unfortunately, although slow down, the reaction could still happen between the K metal and water/oxygen in the open air. On the other hand, during working on the reaction mechanism, KF can be detected on the blast reaction-generated layer. This result means the K metal snatches the F from the PTFE, and the KF is an important component of SEI. Can it be used as the artificial SEI? Luckily, we succeeded.

Based on all the phenomena and experimental results, we try to explain the reaction and make use of it. The following parts are what we have done. 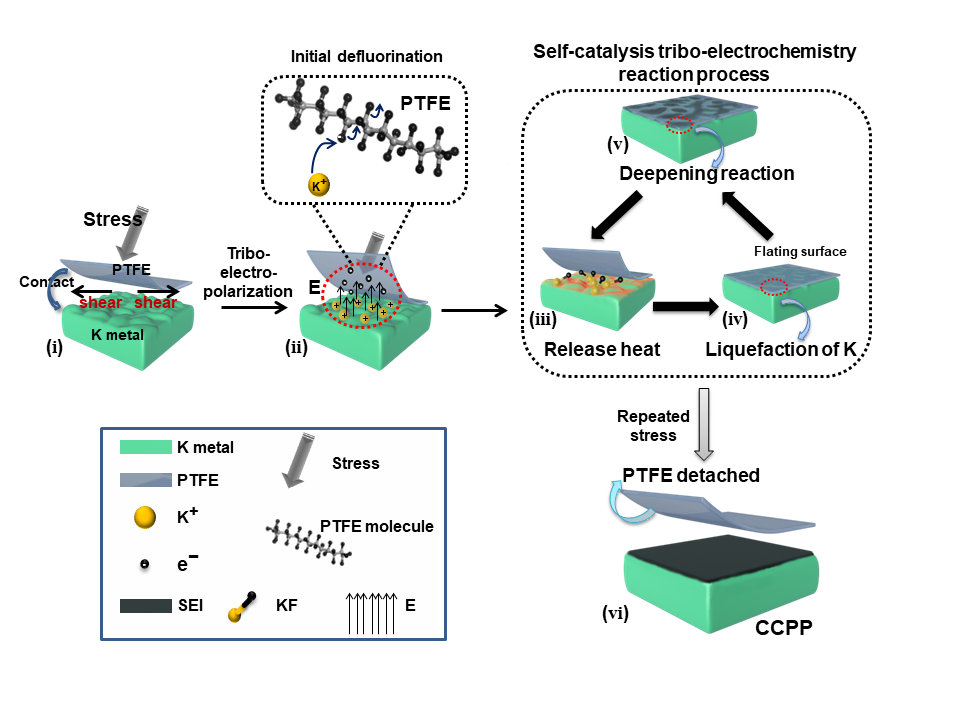 As shown in Figure 1, based on the triboelectric series of the capability to obtain electrons2, a mechanism of the reaction was proposed, namely a self-catalysis tribo-electrochemistry reaction.

Typically, solid K metal hardly reacts directly with PTFE. However, when a force (including press, friction etc.) is applied, with the increasing of the force, a critical point can be reached where an instantaneous and powerful reaction happens. The experiments also show that a very slow reaction happens between PTFE and liquid Na-K alloy without force, while quick and violent reaction occurs with a certain friction or pressure. These phenomena indicate that something critical triggers and accelerates the reaction process, we call it the trigger (catalyzer).

No violent reactions occur when the liquid Na-K alloy droplet simply touches the PTFE plate. However, by repeatedly lifting and dropping the liquid Na-K droplet onto the PTFE plate, an explosive reaction happens after several cycles. This phenomenon means something accumulates during the lifting and dropping cycles and reaches to a critical point when the reaction happens.

Recently, Wang and co-authors reported a high-density charge induced on the surface of PTFE film under the impinging water droplets3. Based on it, it can be speculated that charges accumulate on PTFE during the lifting/dropping process and trigger/catalyze the reaction. For direct proof, charge measurement is made with the grounding device. As shown in Figure 2, no current can be detected when no force is applied to the joint surface between PTFE and K metal (blue line, baseline). However, as the regular pressure is applied, the current output signal will appear correspondingly (red line).

Figure 2.The output current with regular force applied to the grounded joint surface between PTFE and K metal.

Taking these into consideration, we conclude that the charges accumulated on PTFE trigger the powerful reaction. Once a pressure is applied, a lateral shear occurs between K and PTFE. That is, there is a friction interaction between the two, causing the transfer of charge between each other, as shown in Figure 1 (ⅰ). The extra electrons lead to a high tribo-electric field (Figure 1 (ⅱ)), acting as the catalyzer and triggering the reaction. External force is only the initiator to the charge.

With the accumulated charges, an electric field is built. Promoted by the electro-inductive effect from the electric field4, the F atoms begin to react with K at room temperature, and the C-F bond will be broken down as well as the KF will be generated, as shown in Figure 1 (ⅱ). The initial defluorination of PTFE by reacting with 1 mol K will release 1421 KJ mol-1 heat (Figure 1 (ⅲ), which is theoretically enough to melt ~1308 mol K.

The surface of solid K metal is uneven and has many bumps. Liquid K has better fluidity, wettability, and permeability. Once the reactions between PTFE and K begin, K protrusions will be melted by reaction heat and liquid K will spread out quickly to level the K metal surface, as shown in Figure 1 (ⅳ).

Solid K will hardly react with PTFE without the catalysis of charge. At the same time, it has been reported that liquid K (including K amalgam and hot melt K) can react with PTFE. Thereof, after the initial defluorination, the released heat and liquefied K will make the reaction extremely easier, wider and deeper, as presented in Figure 1 (ⅴ). Then more heat released and more K liquefied, the reaction is further deepened. That is, a chain reaction begins (Figure 1 (ⅲ, ⅳ, ⅴ), leading to a continuous and uniform reaction and a compact reaction layer (Figure 1ⅵ). 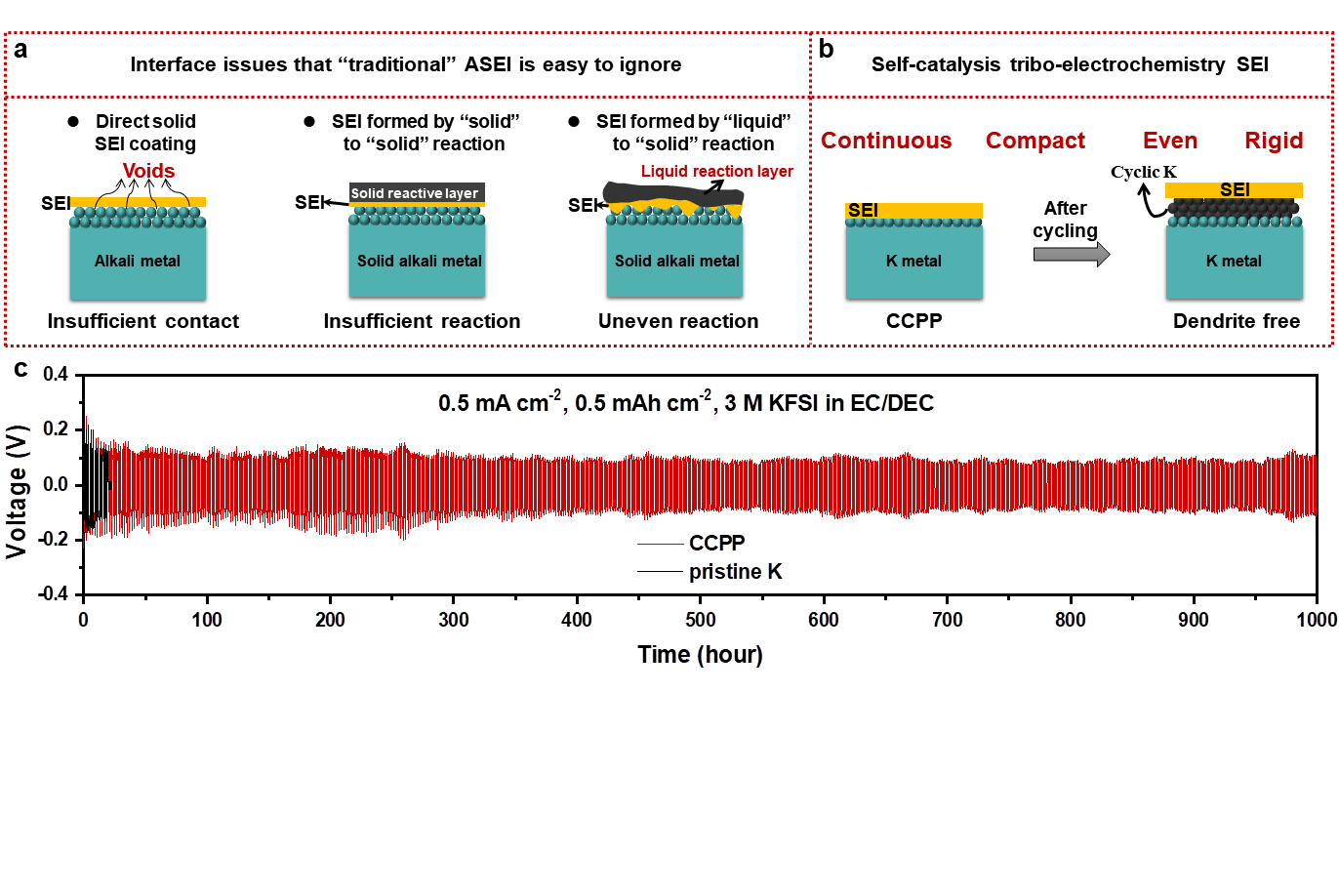 Through a self-catalysis tribo-electrochemistry strategy, the continuous and compact protected potassium (CCPP) anode (Figure 1ⅵ) is obtained. It is different from traditional ASEI construction strategies, which usually exist some unsolved interface issues including weak adhesion or insufficient/uneven reaction (Figure 3a). The surface K transforms from solid to liquid to level the electrode and deepen the reaction, as well as the uniform triboelectric charge distribution brought by repeated friction, the ASEI of CCPP is continuous and compact (Figure 3b), which feature can significantly improve the stability of K anode . As a result, the potassium symmetric cells exhibit stable cycles last more than 1000 h, which is almost 500 times of pristine K (Figure 3c).

A cyan spie for salt in cells 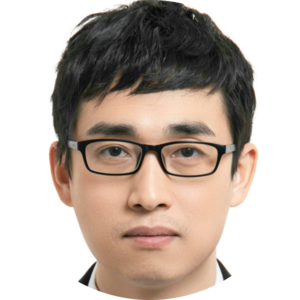