We study triple ionization mechanisms in benzene trimer that are initiated by the creation of a deep-lying carbon 2s state or one outer-valence and one inner-valence vacancies at two separate molecules. The system can relax via ultrafast intermolecular decay processes, forming a tricationic trimer.
Xueguang Ren
Professor, Xi'an Jiaotong University
Follow
Like Liked by Sorrel Bunting and 1 other
0

Higher-order aromatic clusters are prevalent in biochemical systems, but a full understanding of their structural and dynamical properties is lacking. Here, the authors demonstrate that inner-valence ionization can induce ultrafast relaxation and further fragmentation mechanisms in benzene trimers.

High-order aromatic clusters are highly presented in macro-biomolecules. Investigations on their structures and dynamics are relevant to a wide variety of research fields ranging from the stability of proteins and DNA to drug binding and crystal engineering. Studying the properties of excited states in molecular complexes has recently attracted considerable interest due to the possibility for opening various ultrafast energy and charge transfer processes like the intermolecular Coulombic decay (ICD). For ICD in a molecular dimer, its de-excitation can cause ionization of the neighboring molecule, which leads to ejection of a low-energy electron and formation of two repulsive ions undergoing Coulomb explosion.

Here, by using benzene trimers as the basic building unit of higher-order aromatic clusters, we study the electron-collision (260 eV) induced ionization process and the subsequent reaction dynamics of triply-charged ions. Our studies through fragment ions coincident momentum spectroscopy, supported by strong-field laser (~6×1014 W/cm2, 40 fs) experiments and ab-initio molecular dynamics simulations in which we consider eight different conformational geometries of the neutral benzene trimer, provide the mechanistic details about the fragmentation dynamics of benzene trimers. We identified two ultrafast decay mechanisms in the triple ionization of benzene trimers. One is assigned to double sequential ionization plus ICD (dSI+ICD), where one outer-valence and one inner-valence vacancies are created separately at two molecules of the trimer and the following ICD process causes the ionization of the third benzene molecule. The other one is double ICD (dICD), which is initiated by electron-collision with the removal of a deep-lying carbon 2s (C2s) inner-valence electron. Afterward an electron from outer-valence shell of C6H6+ fills the C2s−1 vacancy, and the energy released ionizes the neighboring two molecules. The present study of ultrafast ionization processes in benzene trimers has proven a valuable tool for imaging the structure of molecular complexes.

Our work reveals a concerted fragmentation mechanism with a dominant symmetric triangular configuration for the three-body dissociation of benzene trimers, which can be a general phenomenon occurring in biological systems. You will find more details from the paper “Triple ionization and fragmentation of benzene trimers following ultrafast intermolecular Coulombic decay” at https://doi.org/10.1038/s41467-022-33032-2 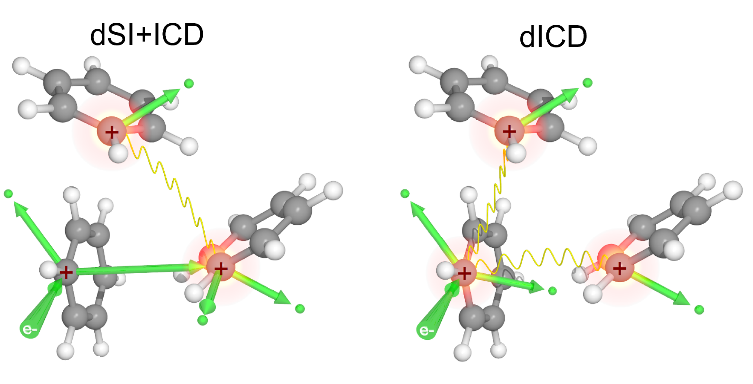 We study triple ionization mechanisms in benzene trimer that are initiated by the creation of a deep-lying carbon 2s state or one outer-valence and one inner-valence vacancies at two separate molecules. The system can relax via ultrafast intermolecular decay processes, forming a tricationic trimer.