The preparation of materials that display macro-mechanical responses to external stimuli is challenging. Here, the authors synthesize metal-organic rotaxane frameworks that contain photoactive axles as linkers; light irradiation triggers photodimerization of the ligands, which leads to macroscopic p…

In recent years, based on the common mechanical interlocking structures with dynamic behaviors such as rotaxanes and locked hydrocarbons, great progress has been made in the research on molecular machines, and scientists' manipulation of molecular motion has reached an unprecedented new height. However, there is still a gap between the research on molecular machines and practical applications. The key to whether molecular machines can become practical is to realize their integration, deviceization, and scaling. One of the most challenging problems is how to manipulate the microscopic changes of molecular units to achieve macro-mechanical responses.

To this end, our team proposed a cucurbit[8]uril-based host-guest system with photodimerization activity into metal-organic rotaxane framework for the first time. A new photoactive actinide polyrotaxane framework material (named U-CB[8]-MPyVB) was successfully constructed via coordination bonding by uranyl nodes. As expected, this supramolecular framework system composed of basic units of molecular machines can exhibit good macroscopic mechanical responses under ultraviolet light irradiation. The microscopic mechanism study shows that this framework has two intriguing attributes: a) the confinement effect of the macrocycle and the steric hindrance of the metal coordination make the two vinyl units in the macrocycle close to each other and possess the ability of photodimerization; b) due to the ordered arrangement and collective motion of the various structural units in the U-CB[8]-MPyVB lattice, the internal stress generated by the local photochemical reaction can be effectively accumulated in the lattice, which finally induces the photo-triggered bending of these rod-like crystals. Compared with other photobendable crystals, the confinement effect and pillaring effect of macrocycles slows down the bending rate of the crystal by nearly two orders of magnitude, which is crucial to the capture of intermediate compounds during the photodimerization process of crystalline molecular machines and makes the precise control of macroscopic bending possible. 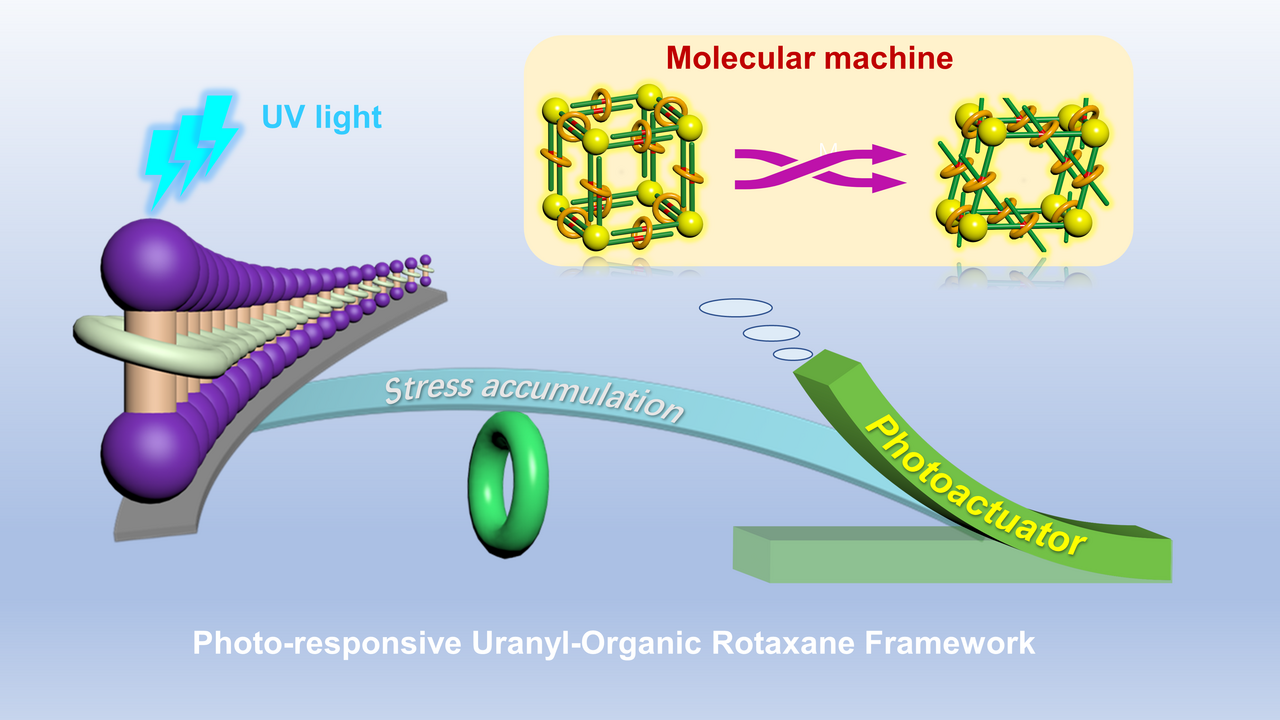