Seeking high efficiency in the valorization of biomass-derived feedstocks is a great challenge. Now, a linear paired electrochemical valorization of glycerol to mainly C3 oxidation products is achieved in both compartments by combining the electro-Fenton process at a NiSe2 cathode and the direct oxi…

Electrochemical oxidative upgrading of biomass-derived feedstocks into high-value chemicals offers a sustainable route for utilizing biomass resources and decarbonizing chemical manufacturing.1 Glycerol (C3H8O3), a byproduct of the rapidly growing biodiesel production, has become a surplus and cheap biomass-derived chemical.2 Electrochemical oxidation of glycerol is attractive because all C3 and C2 oxidation products have higher economic value than glycerol;3 however, as depicted in Figure 1a, this value-added half-reaction typically occurs only at the anode and is paired with a cathodic half-reaction that either generates lower-value products than glycerol-derived chemicals (e.g., H2 from hydrogen evolution reaction, H2O from the four-electron oxygen reduction reaction)4 or introduces additional system complexity and product separation cost due to different cathode and anode feeds (e.g., cathode produces C1 and C2+ products from CO2 or CO reduction reaction).5

Now, writing in Nature Catalysis (https://doi.org/10.1038/s41929-022-00826-y), we report a new approach of cathodic valorization of glycerol into mainly C3 and C2 oxidation products at an earth-abundant metal compound-based NiSe2 electrocatalyst, where H2O2 is electrogenerated from the selective two-electron oxygen reduction reaction (2e− ORR) in acidic solution, and then undergoes the Fe2+-mediated electro-Fenton process and gets converted into the highly oxidizing hydroxyl radical (·OH) that is responsible for glycerol oxidation in the catholyte. This novel cathodic valorization of glycerol enabled by the electro-Fenton process further allows for linear pairing with anodic oxidation to produce the same glycerol-derived oxidation products concurrently at both cathode and anode using glycerol as the sole feed, which we demonstrated in a proof-of-concept linear paired electrochemical system shown in Figure 1b.

Our endeavor started with identifying a cathode electrocatalyst that is not only selective for 2e− ORR in acidic solution but also stable in the presence of strong oxidants such as H2O2 and ·OH. Our previous joint computational-experimental studies have established transition metal chalcogenides such as CoS2 (ACS Catal. 9, 8433–8442 (2019)) and CoSe2 (Energy Environ. Sci. 13, 4189–4203 (2020)) as robust acidic 2e− ORR catalysts. The large spacings between the neighboring metal active sites separated by lattice anions in their crystal structures facilitate the catalytic selectivity toward reducing O2 to H2O2 (vs. H2O). On the other hand, suppressing catalyst metal/chalcogen leaching into solution is key to the catalytic stability, which can be indicated either by bulk Pourbaix diagrams freely available from the Materials Project6 or by computational analyses of surface adsorbate energetics. We previously found that CoSe2 is more stable acidic 2e− ORR catalyst than CoS2, because CoSe2 not only exhibits a wider electrochemical stability window in the bulk Pourbaix diagram, but also features a much weaker binding of surface oxygen adsorbate (O*) to its Se site and thus is more resistant to surface oxidation and leaching.

In this current work, in pursuit of an even more stable cathode electrocatalyst for acidic H2O2 electrosynthesis and the electro-Fenton process, we establish NiSe2 (Figure 2a) as a new benchmark metal compound-based acidic 2e− ORR catalyst that is more resistant to leaching of metal and Se than our previous benchmark (CoSe2) under acidic electrochemical operating conditions (Figure 2b). The high stability of NiSe2 catalyst is showcased by the long-term (37 hours) sustained H2O2 bulk electrosynthesis at the optimum operating potential of 0.60 V vs. reversible hydrogen electrode (RHE). These encouraging results show promise for utilizing the stable NiSe2 cathode to drive the electro-Fenton process that is more demanding for catalyst stability because of the highly oxidizing ·OH.

The electro-Fenton process is mediated by a trace amount of soluble Fe2+ to convert the cathodically generated H2O2 into ·OH at the optimum acidic pH of ~3 (Fe2+ + H2O2 + H+ → Fe3+ + ·OH + H2O).7 The oxidizing power of the electro-Fenton process can be influenced by the relative concentration of ·OH to the to-be-oxidized substrate. Since glycerol oxidation proceeds via sequential pathways that can lead to various C3, C2, and C1 products (Figure 3a), controlling the rate of ·OH generation could be important for achieving a majority of valuable C3 (and C2) oxidation products and avoid the over-oxidation to C1 (or CO2) products. Therefore, we operate NiSe2 cathode at the optimum potential of 0.60 V vs. RHE for steady-state H2O2 generation, and carefully study the impact of Fe2+ concentration ([Fe2+]) on cathodic valorization of glycerol. As shown in Figure 3b, both the glycerol conversion percentage and the C3 product selectivity can be simultaneously optimized when applying an intermediate [Fe2+] of 0.5 mM (in the range of 0 to 2.5 mM).

Finally, we put together all of the pieces to demonstrate a proof-of-concept linear paired electrochemical system for glycerol valorization concurrently at both NiSe2 cathode via the electro-Fenton process and at Pt anode via direct oxidation (Figure 4a). This linear paired system can achieve high glycerol conversion up to 55%, with a high selectivity toward valuable C3 (and C2) oxidation products (Figure 4b). Moreover, this linear paired system can steadily operate at a marginal external bias as low as 0.2 V, which appears to be caused mostly by internal resistance, suggesting that little external energy input is needed. We note that the overall linear paired process can be viewed as a controlled partial oxidation of glycerol by oxygen gas, which should be thermodynamically spontaneous. Therefore, we anticipate an unbiased linear paired system that needs no external bias and no external energy input for efficient glycerol valorization could be realized upon future optimization.

In summary, the design principles for stable and selective electrocatalysts for acidic H2O2 production and the electro-Fenton process, and the conceptual strategy of linear pairing of the electro-Fenton process with anodic oxidation presented here can open up new opportunities for electrochemical valorization of a variety of biomass feedstocks with high atom efficiency and low energy cost.

If you would like to learn more details about our work, please take a look at our paper published in Nature Catalysis: https://doi.org/10.1038/s41929-022-00826-y (free-to-read link: https://rdcu.be/cTYXE). I hope you enjoy your reading and find it interesting! 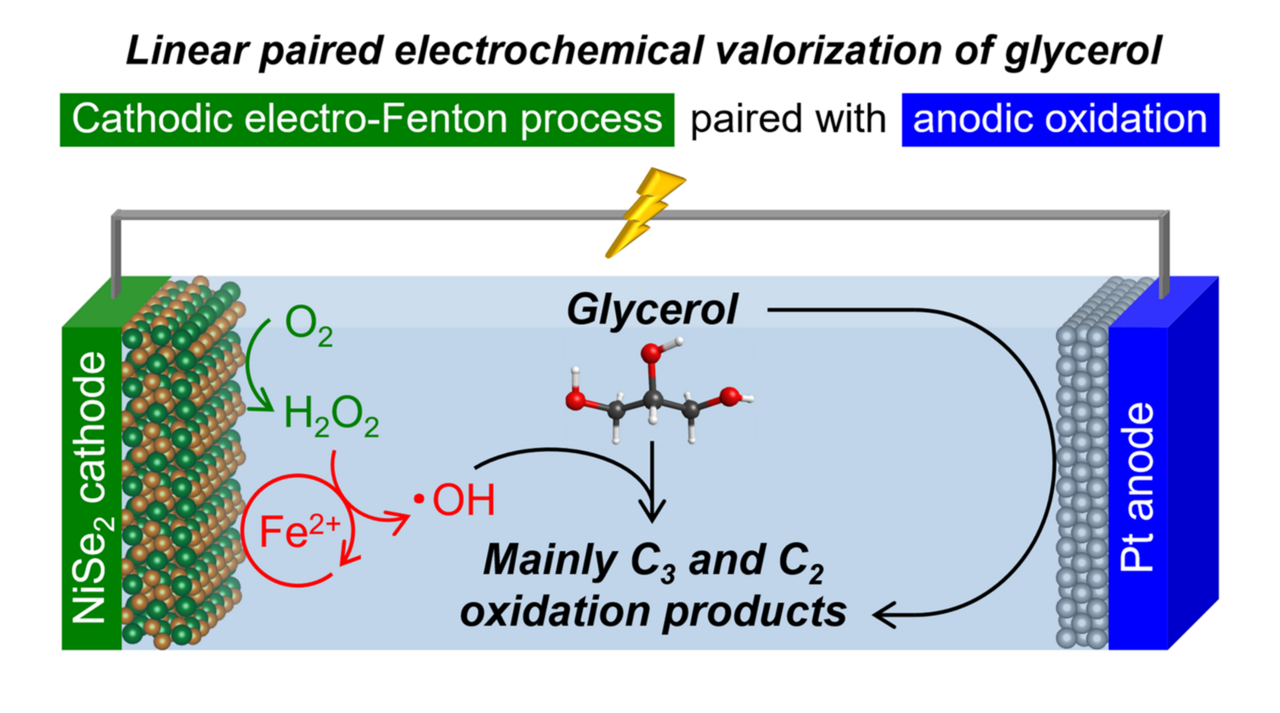