Photocatalysis is mainly about water splitting, environmental applications and functionalization of organic compounds. But wait… there is more! Below is an example of unconventional photocatalysis using semiconductor nanoparticles and light to tune reversibly conductivity of polymers.

Scientists that work in different areas have different names for the same concept. For example, organic chemists call a frontier orbital, where the electrons sit as ‘highest occupied molecular orbital’. The same concept is called ‘valence band’ by material chemists.

‘Radical cation’ is a term used by physical chemists and organic chemists with respect to small molecules. In the context of large molecules, polymer scientists prefer to say ‘polaron’.

LUMO and conduction band, bipolarons and dications these are also examples of such dualism. After all, we may consider electron as a wave or a particle.

On the one hand, such ambiguity makes life of non-experts difficult – one does not simply walk into a new research topic. On the other hand, once we know what is actually hidden behind a particular term, we can apply principles commonly used in one area of research to another. Let me explain it with one example.

Here is a general photoredox cycle. 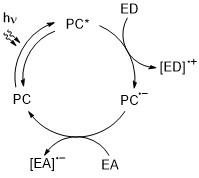 One may find the same or very similar cycle practically in every article on organic photoredox catalysis. In such cycle, organic dye or photoredox complex (the photocatalyst, PC) oxidizes one molecule (electron donor, ED) and reduces another one (electron acceptor, EA). These small radical ions then react in a specific way to give products. In this cycle, the excited state of the photocatalyst is quenched reductively – the PC* gains one electron and forms the intermediary radical anion.

If now we replace small organic ED with a polymer, such as poly(thiophene), and show the photoredox cycle to somebody who knows about conductive polymers, the person would claim instantly (probably with a bit of sarcasm): ‘Wow! You have just reinvented p-doping of conductive polymers!’

In our article in Angewandte Chemie, we developed a different concept. We used nanoparticles of organic semiconductor, potassium poly(heptazine imide), to trigger p-doping of poly(thiophene)-based polymer upon irradiation with visible light. Under such conditions, semiconductor nanoparticles (PC in the scheme above) oxidize conductive polymer (ED) and therefore change its conductivity. As you may have already guessed, we used O2 as the EA to close the catalytic cycle.

How fast is this process and how significant is the change of polymer conductivity?

How sensitive is the system to the external stimuli – light intensity and concentration of O2?

Does any photocatalyst work in this approach?

Answers on these and many more questions are in our article in Angewandte Chemie.