This work dives into the mechanistic intricacies of a nickel-catalysed cross-coupling of aryl esters. We cover the on-cycle speciation, with crystallographic snapshots of key reaction intermediates but also reveal interactions between Ni and Zn species during catalysis.
Craig Day
PhD Canidate, ICIQ
Follow
Like

Mechanistic details of Ni-catalysed functionalizations of strong sigma C–O bonds in synthetic chemistry have been elusive. Now, the identification and characterization of important Ni species, as well as the role of a ZnCl2 additive and solvent in the coupling of aryl esters, are reported.

Our group has developed new catalytic methodologies to functionalize strong C-O bonds (commonly aryl esters) for nearly a decade - uncovering transformative reactions in organic synthesis. Troubling however, are the mechanistic scenarios encountered in these reactions which are still enigmatic, making further chemical innovation challenging. As such, we've contributed a series of mechanistic reports that interrogate these reactions1,2 but key on-cycle intermediates present during aryl ester functionalization reactions remained elusive. In this work, we synthesise these intermediates - (PCy3)-NiII(Ar)(OPiv) - and are able to study them in both productive and unproductive catalytic pathways; disclosing comproportionation and disproportionation events as undesirable pathways that compete with productive transmetallation (Figure 1. - https://doi.org/10.1038/s41929-020-00560-3).

During these studies, I was reading about bimetallic complexes (particularly high bond order, bimetallic complexes) that break some of the early rules chemists believed about bond orders, and bonding interactions. From this literature, it seemed plausible that Ni and Zn could participate in analogous reactions as other bimetallic systems, and we be believed that understanding these interactions could present a new way of understanding of Negishi cross-coupling reactions. This interest in bimetallic interactions between Ni and Zn was compounded when Jesús Campos (https://jcamposgroup.iiq.us-csic.es/) came to the Institut Català d´Investigació Química (ICIQ) to give a lecture on heterobimetallic complexes which could be broken into two components; a nucleophilic transition metal and electrophilic transition metal. Considering these concepts of bimetallic interactions in the Negishi cross-coupling reaction we were studying, we believed a more complex scenario than the traditional catalytic cycles proposed was operative. Typically, organozinc species used in Negishi cross-coupling reactions are viewed as the nucleophilic coupling partner, invoked during transmetallation to assist in the desired C-C bond forming reaction. We hypothesize instead is that unligated Zn(II) salts would rather act as electrophilic entities (particularly ZnX2 salts formed during transmetallation and the Schlenk equilibrium) and interact within the Ni catalytic cycle as lewis acids. Indeed, when a more complete catalytic cycle invoking interactions between Ni and Zn was investigated, multiple overlooked interactions (Ni-Zn cluster formation, oxidation events, anion exchange, and ligand scavenging) were occurring.

Notably, we provided evidence and rationalizations for the reaction of Ni(0) and ZnCl2 (Figure 2.). These findings also suggest reasons for why Negishi cross-coupling reactions are so prevalent in Pd catalysis (Pd-Zn interactions likely being weaker, and not resulting in further deactivation events) but analogous uptake has been slow in Ni catalysis. From this understanding, we were further able to deconvolute one role of amide solvents in the cross-coupling reaction. Amide solvents are able to act as ligands for Ni and Zn and disrupt intermetallic Ni/Zn binding and the subsequent deactivation events. We believe these investigations set the president to reconsider the role of Zn(II) salts in catalysis much broader than the scenario studied here since a multitude of catalytic reactions find these salts present and are largely overlooked. This should be particularly relevant in cross-electrophile coupling reactions that using stochiometric zinc as a reductant (also a class of reaction where amide solvents are mainly used) or when attempting to utilise Zn salts as lewis acids. Check out more at: https://doi.org/10.1038/s41929-020-00560-3. 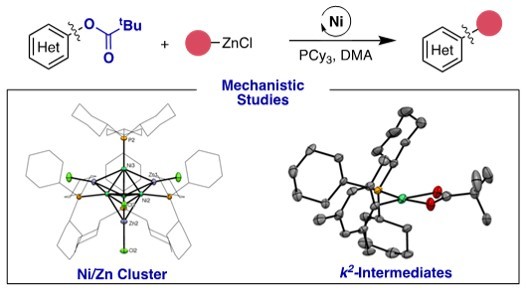 This work dives into the mechanistic intricacies of a nickel-catalysed cross-coupling of aryl esters. We cover the on-cycle speciation, with crystallographic snapshots of key reaction intermediates but also reveal interactions between Ni and Zn species during catalysis.