Untangling the History of Fluorinated Polyacetylene

At a symposium on polymer science in March of 1979 at the IBM research laboratories in San Jose, Hideki Shirakawa presented his vision for an as-of-yet undiscovered fluorinated polyacetylene.1 Material scientists were still digesting his recent collaborative discovery of highly conductive doped polyacetylene that would later deliver him a joint Nobel prize in 2000.2 At the symposium he had teamed up with veteran compatriot Kenichi Fukui, whose pioneering work on frontier molecular orbital theory would earn him his own Nobel prize two years later. They predicted that this new form of polyacetylene would have modified optical properties and improved solid-state packing, as well as be amenable to n-type doping for improved conductivity. Although Shirakawa and Fukui suggested a possible synthesis of fluorinated polyacetylene by polymerizing a suitable fluorinated acetylene, it was never realized. The monomer they proposed, difluoroacetylene, is highly unstable and spontaneously oligomerizes unproductively at –95 ºC.3 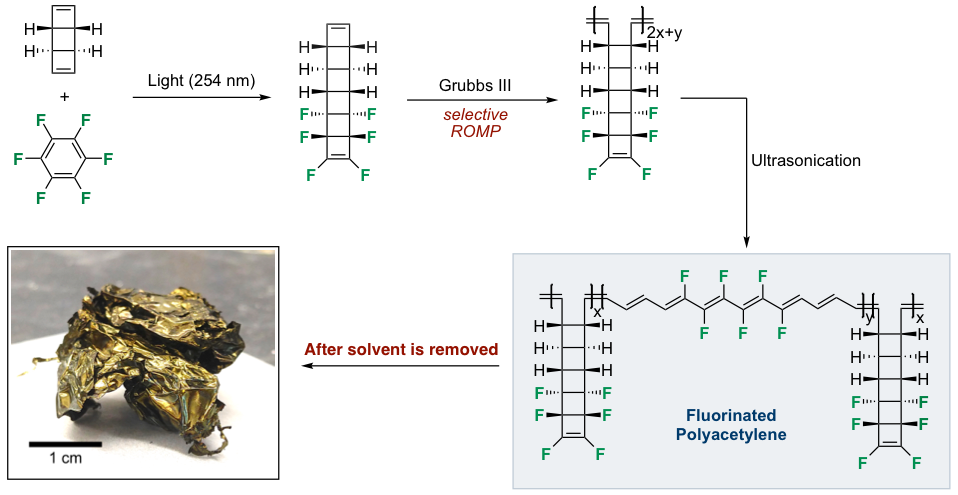 To overcome this synthetic obstacle, we developed an alternative synthesis of a semi-fluorinated polyacetylene by unzipping a precursor polymer (Figure, bottom right).4 The key step in our synthesis was an unusual photochemical cascade reaction that rapidly assembled the fluoroladder scaffold, and whose mechanism was informed by computation of the excited states. Polymerization was then achieved by ring-opening metathesis polymerization (ROMP). When we applied force to this colorless fluoroladderene polymer, insoluble fluorinated polyacetylene precipitated from the midnight blue solution. Surprisingly, upon removal of solvent we discovered that the now semiconducting solid fluorinated polyacetylene displayed an iridescent gold-color (Figure, bottom left). With material in hand, we can now begin to investigate the predictions by Shirakawa and Fukui.

In recent years, the field of polymer mechanochemistry has emerged to harness mechanical force experienced by macromolecules into productive chemical reactions.5 Specially designed functional group that undergo some chemical change from stress or strain are called mechanophores. Ultrasonication of polymers in solution is a convenient method for applying the necessary forces to cleave covalent bonds in mechanophores. While most examples of force-responsive polymers feature the breakage of one or two bonds, a polymer composed entirely of mechanophores can result in dramatic transformations of a material upon mechanical activation. 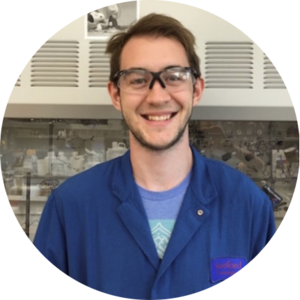