Natural products containing xanthone scaffold showed diverse pharmacological properties. Here, we mainly elucidate the underlying mechanism and structure base for multistep of oxidations of FlsO1, and this study help developing the sights of versatile functions of flavoproteins.
Chunfang Yang
Associate Research Fellow , South China Sea Institute of Oceanology, Chinese Academy of Sciences
Follow
Like Liked by Changsheng Zhang and 2 others
0

The biosynthesis of xanthones has not been well documented. Here, the authors report that monooxygenase FlsO1 catalyzes three successive oxidations – hydroxylation, epoxidation and Baeyer–Villiger oxidation—to form the xanthone scaffold in actinomycetes.

Natural products containing xanthone scaffold showed diverse pharmacological properties, such as anti-inflammatory, anti-oxidant, anti-microbial, and anti-tumor activities. Numerous xanthones have been isolated from different sources since the first xanthone compound reported four decays ago. Diverse methods have also been developed for the chemical synthesis of xanthones. However, the biosynthetic mechanisms of the xanthone formation have not been well documented.

Fig. 1 The physiological and unexpected functions of the multi-functional monooxygenase FlsO1.

Fluostatin C (FST C, 7) is a marine-actinomycete (Micromonospora rosaria SCSIO N160) derived compound and belongs to benzofluorene-containing atypical angucyclines, the same class of kinamycin A. During our biosynthetic studies on FSTs, the monooxygenase FlsO2 was biochemically characterized by us to efficiently convert prejadomycin (PJM, 8) to dehydrorabelomycin (DHR, 9) through CR1 (10) (Fig. 1). To our surprise, the production of DHR (9) was still observed in the flsO2-inactivation mutant of M. rosaria SCSIO N160, although in minor amount (Org. Lett. 17, 5324, 2015). Given the presence of several highly similar monooxygenases in the FST biosynthetic gene cluster, we then hypothesized that one of these monooxygenases might compensate for the function of FlsO2 to convert 8 to 9. In the meantime, Professor Keqian Yang’s group, Institute of Microbiology, Chinese Academy of Sciences, reported that the monooxygenase AlpJ (a homologue of FlsG) catalyzed an oxidative B-ring cleavage and contraction to convert DHR (9) putatively to benzo[b]-fluorene intermediate (12) (Fig. 1). They also proposed that the flavoenzyme AlpK probably further hydroxylated 12 at C-5 to hydroquinone-kinobscurinone (13) (Chem. Commun. 51, 8845, 2015), which was indirectly confirmed by the Balskus’s group in a coupling reaction of AlpJK (J. Am. Chem. Soc. 139, 2864, 2017). Last year, we also performed the in vivo characterization of the flavoprotein monooxygenase (FPMO) FlsO1 as the C-5 hydroxylase that putatively converted 12 to 13 (Fig. 1), functionally equivalent to its homologous enzyme AlpK (J. Org. Chem. 86, 11019, 2021). However, the direct in vitro biochemical characterization of FlsO1 and AlpK was hampered by the inavailability of the highly instable substrate 12. Interestingly, we recently isolated an intermediate nenestatin C (14) (Fig. 1) from the biosynthetic pathway of nenenestatin A (Org. Biomol. Chem. 19, 4243, 2021), which had the same carbon scaffold as 12 and could serve as a potential substrate mimic of 12.

To address whether another FPMO in the FST pathway can complement the function of FlsO2, we overproduced four enzymes FlsO1, FlsO3, FlsO4 and FlsO5 to probe their activity toward 8. Although FlsO3‒O5 are inactive, to our delight, FlsO1 indeed can efficiently convert 8 to 9. This observation satisfies our curiosity to find the enzyme sharing the same function as FlsO2. More impressively, FlsO1 not only catalyzes the conversion of 8 to 9, but also is capable of transforming 8 into multiple products, which are characterized as xanthone-containing products 16 and 17 and the C-ring opening compound 18 (Fig. 1). This is a bona fide unexpected finding. We then performed a series of experiments, including time course study on the FlsO1 reaction with 8, intermediates/shunt products characterization, and isotope-labeling studies (18O2 and MeOH-d4) to eventually led to an-experiment-data supported hypothesis of the FlsO1-catalyzed xanthone formation. It involves three-step successive oxidations (including hydroxylation, epoxidation and Baeyer-Villiger oxidation) (Fig. 2). In brief, FlsO1 first catalyzes C-12 hydroxylation of PJM (8) to 19, which spontaneously becomes 20, which could undergo spontaneous dehydration to 9. Then, FlsO1 catalyzes a second oxidation, namely epoxidation of 20, to afford 22. Subsequently, FlsO1 catalyzes a third oxidation, a Baeyer-Villiger reaction of 22, leading to 29. Finally, 29 can undergo a series of spontaneous reactions to eventually give rise to the xanthone products 16 via two putative routes (routes 1 and 2, Fig. 2).

Next, we use nenestatin C (14), mimicking the natural substrate 12, to probe the physiological function of FlsO1. Indeed, FlsO1, and its homologous enzymes AlpK from the kinamycin pathway and Nes26 from the nenestatin pathway, were confirmed to efficiently catalyze the C-5 hydroxylation of 14, providing direct in vitro evidence to support their in vivo function. Last but not the least, the substrate flexibility and multifunction of FlsO1 can be explained by a broad substrate binding cavity by resolving the crystal structure of FlsO1 in complex with the cofactor flavin adenine dinucleotide (FAD). In brief, this study help developing the sights of versatile functions of flavoproteins.

At last, I also want to share some of my personal experiences in the present work. This work is part of our long-term pursuit goal to understand the biosynthesis of atypical angucyclines and to expand their structural diversity thereby. As an Early Career Researcher, I have learnt a lot since being involved in this project. Once the research project has been in hands, more attentions and patience should be paid, just like taking care of a new baby. Undoubtly, one will meet many troubles, obstacles and even failures in the way of achieving the research goal. It’s necessary to keep calm, thoughtful and persistent. One should be very careful in analyzing details of each experiment and should take immediate actions to resolve the problems. Moreover, one should be curious for any abnormal experimental phenomenon. Any unexpected discovery shouldn’t be overlooked and we should try our best to probe for more hidden information behind the abnormal discovery. In fact, it’s the weird presence of compound 9 in the ∆flsO2 mutant leading to the discovery of unexpected function of FlsO1. Sometimes, we feel frustrated by the unstable reaction intermediates, the unclear NMR signals or the undesired HPLC profiles. However, we never stop and give up what we do. 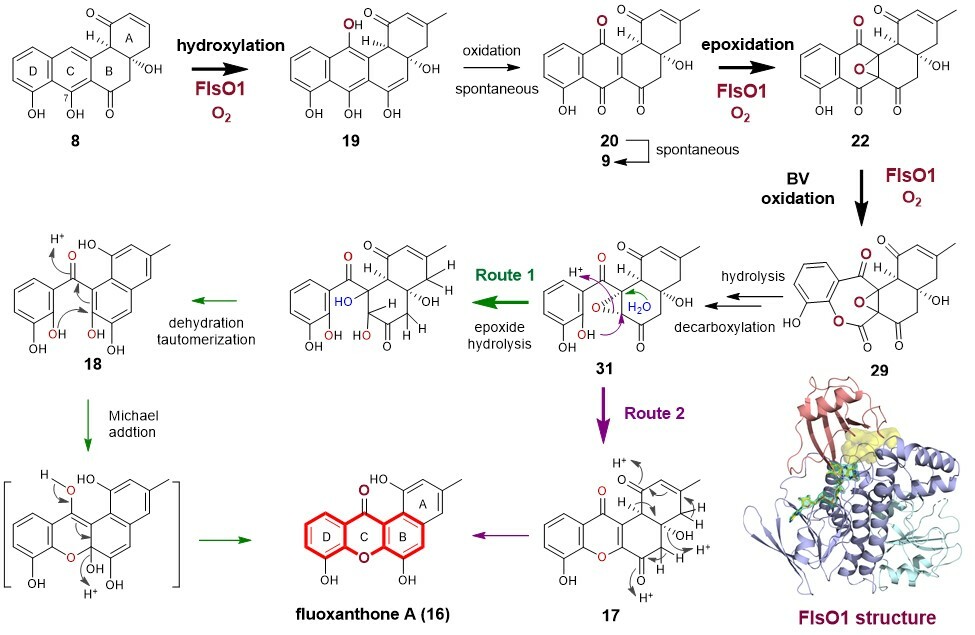 Natural products containing xanthone scaffold showed diverse pharmacological properties. Here, we mainly elucidate the underlying mechanism and structure base for multistep of oxidations of FlsO1, and this study help developing the sights of versatile functions of flavoproteins.