Through molecular engineering, we decipher the mechanism of Pd catalysed Suzuki-Miyaura coupling by means of a high-resolution single molecule platform. We detect sequential electrical signals in a periodic pattern and determine the kinetic and thermodynamic constants of each elementary step.

Deciphering the reaction mechanism is always the target pursued by chemists. Nowadays, this goal has been approached by the booming detection technologies, such as NMR, MS, Raman, EPR and corresponding online detection methods. However, the detection based on the concentration of species (substrates, products, or highly active intermediates) brings inherent average effect by ensemble. For example, the distinguishment of the complex conversion relationship is out of its bearings. Specifically, the debates concerning two possible pathways in the widely used Suzuki-Miyaura cross-coupling have persisted for decades. The first pathway is that the oxidative addition complex LPd(Ar)X (X = halide) exchanges ligand firstly and then interacts with boronic acid to provide the transmetalation complex. The second pathway is that LPd(Ar)X directly undergoes transmetalation with the base-activated ate complex Ar’B(OH)2(OR)− to produce transmetalation complex. Despite the previous mechanistic study on transmetalation mechanism using model systems, unambiguous differentiation of the two mechanisms with highly active Pd catalysts has been a non-trivial task.

The single-molecule detection affords the perspective from the bottom space and breaks this limitation. Just as “There's plenty of room at the bottom” proposed by Richard P. Feynman, the detection at the single-molecule level has been exploring the material science for decades and obtaining numerous intrinsic characteristics or anomalous phenomena.

Different form the detection of labeled molecules with fluorescence, our group dedicates to integrate only one molecule into electrodes, aiming to realize label-free non-destructive monitoring according to its inherent conductance1. After pervious long-term exploration of the preparation of nanogapped electrodes2 and the regulation of the interface coupling of molecule and electrodes3, we have developed functional group terminated carbon-based electrodes and the molecular engineering strategy to design molecules and further successfully prepare completely functionalized (decoupling with electrodes) single-molecule devices (Fig. 1a). A series of reversible intermolecular interactions (host-guest, hydrogen bond interaction) and chemical reactions (photoisomerization, nucleophilic substitution and nucleophilic addition) has been monitored by our platform4, which show the feasibility and lay the foundation to decipher more complex reactions. In addition, our platform also shows the ability to regulate the molecular energy level5 and chemical reaction pathway6 precisely, which may be a promising avenue to achieve artificial manipulation.

Due to the poor reversibility of organocatalysis and organometallic catalysis, it is obvious that the study based on the substrate or the product lacks statistical significance. Therefore, we focused on the catalyst. As the active center of the reaction, the catalyst works repeatedly and traverses the entire reaction cycles. It couldn't be more appropriate to use it as a study object.

Integrating the catalyst between the electrodes and realizing in-situ monitoring require the catalyst to have a stable ligand for loading during the reaction. After chatting with Prof. Fanyang Mo, we started cooperation and selected N-heterocyclic carbene as a stable ligand to load Palladium to realize Suzuki-Miyaura cross-coupling. The “side arms” of the Pd catalyst were used as the spacer units to decouple catalyst and electrodes cleverly according to molecular engineering and the N3 group was grafted to the terminal for anchoring on graphene electrodes.

Then, we synthesized such molecules and integrated one between carboxyl-terminated graphene point electrodes via amide bonds. Inspired by the super-resolution microscopy, we combined the Stochastic Optical Reconstruction Microscopy (STORM) and our electrical platform to obtain a single-molecule image between electrodes and highly correlated optical and electrical signal, indeed indicating the connection of only one catalyst molecule (Fig. 1b).

After the addition of substrate, the change of the conductance of the catalytic center was recorded with 57.6 kHz sampling rates. The periodic signal (including four main conductance states) implied the Suzuki-Miyaura catalysis cycle. A series of control experiments, Inelastic Electron Tunneling Spectroscopy (IETS) and intermediate-limited experiments was designed and conducted to determine a suitable assignment of these conductance states. The conversion from the Pd(0) via the Pd(OR)(Ar), the pre-transmetalation four membered intermediate, the Pd(Ar)(Ar’) and again to the Pd(0) was monitored in our platform, constructing a two-dimensional image of catalysis cycle (Figs. 1c-1f). 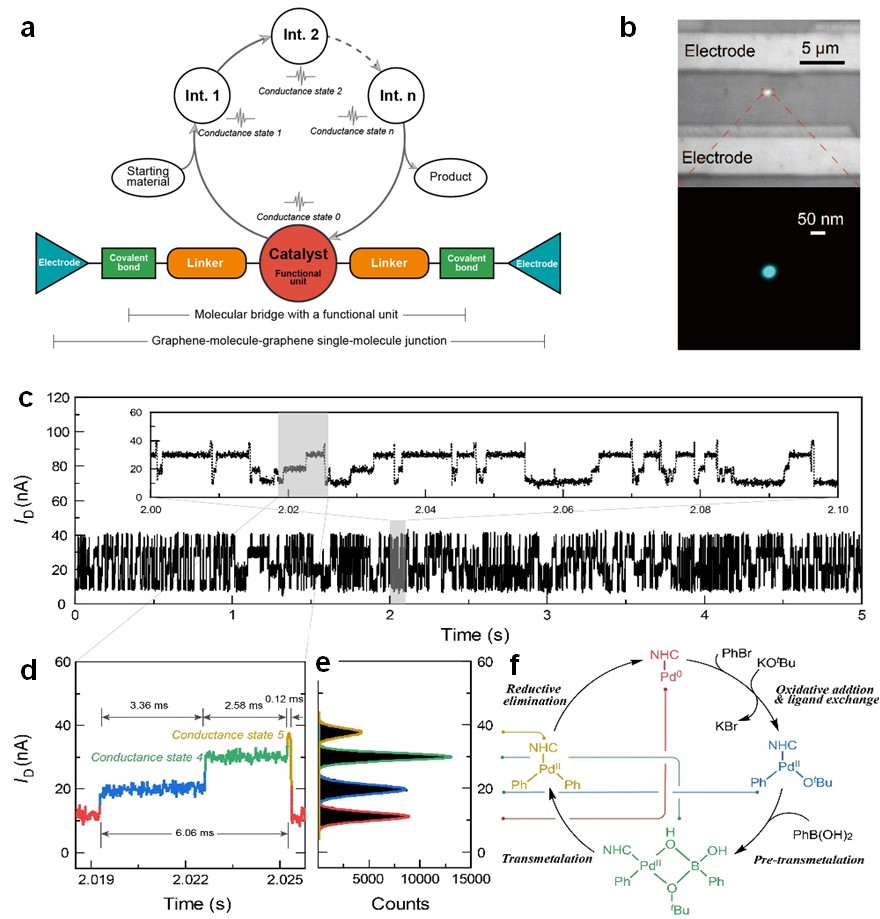 Fortunately, the trajectories from ligand exchange complex Pd(OR)(Ar) to pre-transmetalation complex in the catalysis cycle was detected (Figs. 1c-1e), indicating the ligand-exchange-first pathway was the main mechanism of Suzuki-Miyaura cross-coupling (Fig. 1f). The control experiments and theoretical study also supported this conclusion. In addition, the thermodynamic and dynamic parameter of each elementary step can also be obtained via statistical analysis. 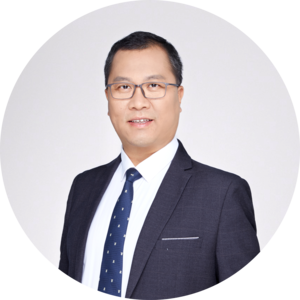