A theory-driven synthesis of symmetric and unsymmetric 1,2-bis(diphenylphosphino)ethane analogues via radical difunctionalization of ethylene - Nature Communications

DPPEs are fundamental bidentate ligands with a C2-alkyl-linker chain for many transition-metal-catalyzed reactions. Here, authors utilize the AFIR method to develop a practical synthetic method for both symmetric and unsymmetric DPPEs with ethylene.

1,2-Bis(diphenylphosphino)ethane (DPPE) and its derivatives are commonly used as bidentate ligands, as these have a significant entropic advantage compared to monodentate ligands when forming rigid transition-metal complexes that often exhibit high catalytic activity in a wide range of reactions.1 Moreover, unsymmetric DPPE derivatives (Ar12P−CH2−CH2−PAr22; Ar1 ≠ Ar2) are more likely to improve the catalytic activity of such transition-metal complexes compared to their symmetric analogues (Ar2P−CH2−CH2−PAr2), given that the reactivity of the metal center can be controlled more accurately by judiciously choosing substituents with a specific electronic and steric profile for both phosphorous atoms of unsymmetric ligands. As DPPEs and related unsymmetric ligands play such an important role in organic synthesis, a facile and robust synthetic route to DPPE derivatives would be highly desirable. The most common methods for the synthesis of DPPE derivatives are SN2 reactions of 1,2-dihaloethanes with alkali-metal diphenylphosphides2-4, and base-catalyzed hydrophosphination reactions of vinylphosphines5. On the other hand, hitherto reported strategies for the synthesis of unsymmetric DPPE derivatives have primarily been limited to hydrophosphination reactions using vinylphosphines with diarylphosphines that possess different substituents on the aryl rings6-11. However, vinylphosphines and diarylphosphines for unsymmetric DPPEs usually have to be synthesized in advance, which often involves multiple synthetic steps. If the two carbon-atom backbone of DPPE could be derived from ethylene gas, which is a commonly encountered versatile two-carbon synthon in industry and academic research, and if the two phosphorous atoms on DPPE could be derived from two different easily available phosphorus precursors, one could develop a robust and on-demand one-step synthesis to provide symmetric and unsymmetric DPPEs (Fig. 1).

To confirm our hypothesis for the synthesis of DPPE derivatives from ethylene, we employed quantum-chemical calculations by using the artificial force induced reaction (AFIR) method in the global reaction route mapping (GRRM) program12, which has been developed by Prof. Satoshi Maeda (Director of the Institute for Chemical Reaction Design and Discovery at Hokkaido University). The AFIR method theoretically induces ‘chemical reactions’ by adding a virtual artificial force between the fragments of compounds to obtain the reaction pathways that contain the structures of substrates, products, intermediates, and even transition states. In this case, we calculated the retrosynthetic route of DPPE by adding an artificial force on one phosphorous atom and its neighboring carbon atom to cleave a C–P bond. Consequently, DPPE was successfully retrosynthesized, which suggested that DPPE could be prepared from ethylene and 1,1,2,2-tetraphenyldiphosphine via a radical reaction.

Based on these theoretical results, we conducted the radical reaction of ethylene and diphosphine in the presence of an Ir-based photocatalyst under irradiation from blue LEDs (Fig. 2). The reaction smoothly proceeded to afford DPPE in high yield. However, diphosphine is unstable under atmospheric conditions and glovebox techniques are required to prepare and handle it. To realize a more convenient synthesis of DPPE without the use of inert-gas techniques, we explored the reaction conditions, and we finally developed a facile and practical photo-induced synthesis of symmetric DPPE derivatives via a three-component reaction (3CR) of ethylene, a phosphine oxide, and a chlorophosphine in the presence of 1,8-diazabicyclo[5.4.0]undec-7-ene (DBU). Various aryl rings containing electron-donating, electron-withdrawing, and other bulky substituents on the phosphorous atoms were tolerated in this reaction to afford symmetric DPPE derivatives. Importantly, this 3CR for symmetric DPPEs could also be extrapolated to the synthesis of unsymmetric DPPEs. When phosphine oxides and chlorophosphines, each of which possess different substituents on their aryl rings, were used, the corresponding unsymmetric DPPEs were obtained in high yield. A variety of aryl substituents with different electronic and steric character can be installed on both phosphine moieties. Furthermore, the thus obtained (un)symmetric DPPEs could be converted into (un)symmetric bidentate ligands upon reduction. Some of these ligands subsequently reacted with Ni, Pd, Pt, or Au salts to form the corresponding transition-metal complexes. Interestingly, a Pd complex possessing an unsymmetric DPPE derivative exhibited different photophysical properties compared to the analogous Pd-dppe complex.

This research strategy, in which computational calculations are used to discover the seeds of new reactions that can be realized and expanded by experimental investigations, will most likely replace conventional trial-and-error approaches in experimental organic chemistry. We hope that our work will lay the foundation for the fundamentally new development of useful new reactions beyond such trial-and-error approaches.

For more details, including mechanistic investigations on such 3CR reactions, please refer to our manuscript “A theory-driven synthesis of symmetric and unsymmetric 1,2-bis(diphenylphosphino)ethane analogues via radical difunctionalization of ethylene” in Nature Communications. 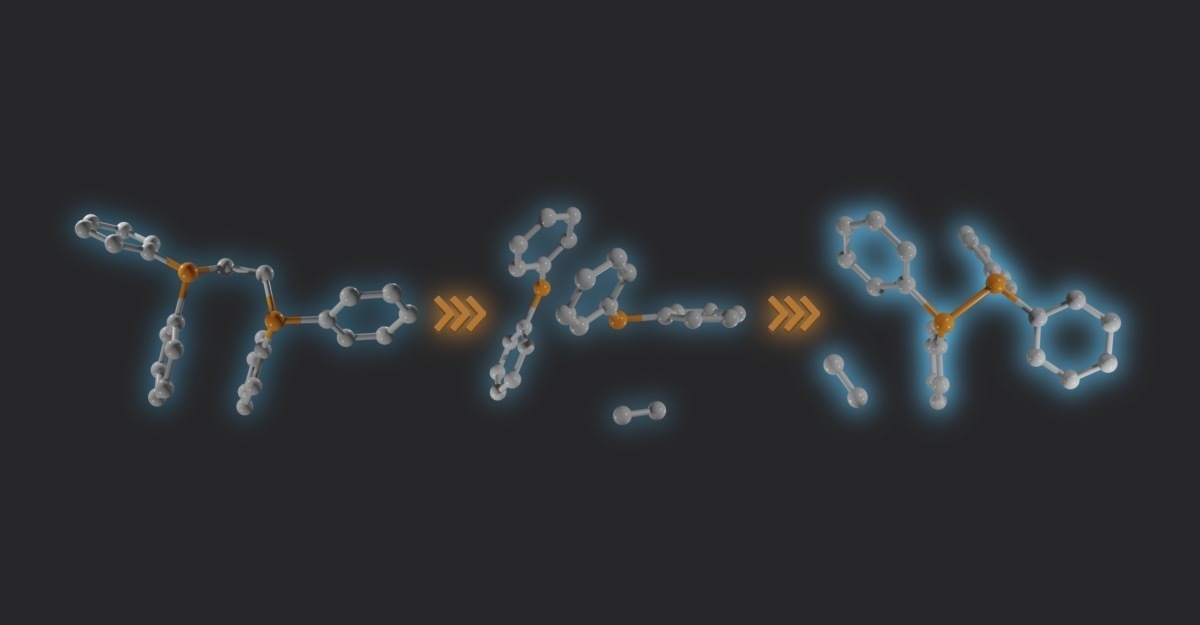