By advanced machine learning techniques, first-principles simulations find that dissolving salt in water does not change water structure drastically. It is contrary to the notion of "pressure effect" which has been widely applied over past 25 years.
Chunyi Zhang
Postdoc, Temple University
Follow
Like Liked by Evelina Satkevic and 1 other
0

By advanced machine learning techniques, first-principles simulations find that dissolving salt in water does not change water structure drastically. It is contrary to the notion of “pressure effect” which has been widely applied over past 25 years.

Salt water is ubiquitous in nature. Understanding the effect of the dissolved salts on the tetrahedral hydrogen-bond network of solvent water is essential to uncover the mechanisms underlying various physical, chemical, biological, and geological processes. Despite centuries of investigations, whether or not water’s structure is drastically changed by dissolved ions is still debated.

Pioneering studies of electrolyte solutions, began as early as the 19th century by Hofmeister, later framed the textbook theory of ions being either structure “breaker” or “maker”. More recently, the structure of salt solutions has been investigated by modern experimental methods. In particular, there are two highly-cited works published in Nature [1] (https://www.nature.com/articles/378364a0) and Science [2] (https://www.science.org/doi/full/10.1126/science.1084801), which probed the structure and dynamics of ionic solutions by neutron diffraction and infrared spectroscopy, respectively. However, rather opposite conclusions are drawn from their experimental data. On one hand, the spectroscopy experiment concludes that there is no major difference between the water outside the ions’ first solvation shell and neat water. On the other hand, the neutron diffraction experiments argued that water structure beyond the ions’ first solvation shell is significantly distorted in a similar fashion to neat water under a few thousand atmospheres pressure. These opposite opinions have been under intense debate for over 25 years and are still unresolved. In principle, ab initio molecular dynamics computer simulations can resolve this fundamental question, starting from the principles of quantum mechanics. However, until recently, the needed computational burden simply made the studies impossible.

In this work, we address the above controversy by employing neural network based molecular dynamics computer simulations [3]. The adopted state-of-the-art deep learning techniques allow us to predict the structure of salt solutions from first-principles, but with significantly reduced computational effort.

Fig. 2a shows the microscopic structure of sodium chloride solutions. The electronic orbitals in a water molecule adopt the well-known sp3 hybridization, giving rise to the near-tetrahedral structure of water. On the contrary, Na+ and Cl- ions both have a closed-shell electronic configuration. Therefore, structures of ionic first solvation shells are largely different from the tetrahedral structure of pure water. The fraction of first solvation shells increases with increasing salt concentration, which results in the change of structure factors (Fig. 1b) and radial distribution functions (Fig. 2b) of NaCl solutions with increasing salt concentration. 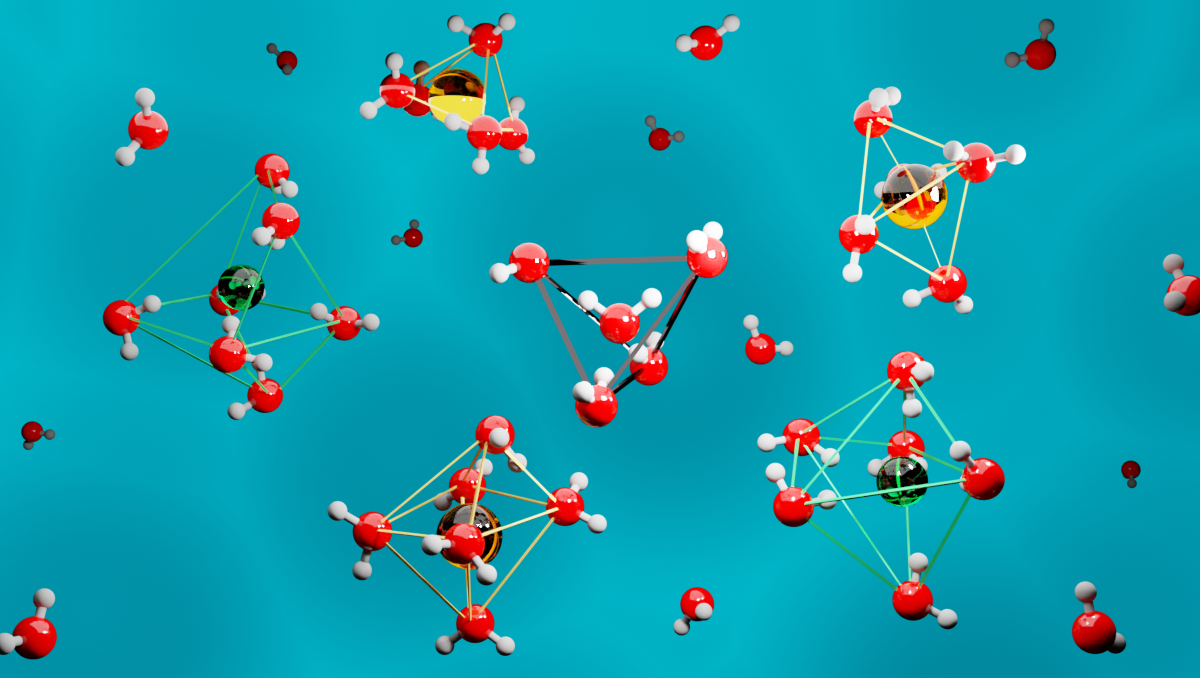 By advanced machine learning techniques, first-principles simulations find that dissolving salt in water does not change water structure drastically. It is contrary to the notion of "pressure effect" which has been widely applied over past 25 years.