Due to high energy-efficiency and low CO2 emission, proton exchange membrane fuel cells (PEMFCs) have been considered the most promising power sources for transportation and stationary applications. Currently, platinum group metal (PGM) catalysts are state-of-the-art for the sluggish oxygen reduction reaction (ORR) at the cathode. However, the use of the large amount of expensive and scarce precious metals represents a grand challenge. The large-scale application of PEMFCs will not be realized until low-cost and high-performance catalysts are available. To this end, tremendous efforts have been made to develop PGM-free catalysts, especially the formulations of transition metal and nitrogen co-doped carbon (M-N-C, M=Fe or Co) catalysts.

Wu’s group at University at Buffalo, SUNY, has led the research and development of PGM-free catalysts for more than a decade. Improvements of activity, performance and durability are grand challenges limiting practical applications of PGM-free catalysts. Recently, Wu’s group has developed a one-step chemical doping method to synthesize atomically dispersed Fe and Co site catalysts, which can significantly increase the density of active sites. As a result, respectful activity has been achieved for both Fe-N-C (half wave potential of 0.85 V) catalysts and Co-N-C (half wave potential of 0.80 V) catalysts. However, they still suffer from insufficient durability. The loss of catalytic activity is due to multiple factors, including: dissolution of active metal sites and carbon oxidation in catalysts. In particular, carbon corrosion of catalysts also promotes dissolution of metal sites, and induces significant charge- and mass- transport resistance due to changes in carbon lattice structures and morphologies. Notably, the best performing Fe-N-C catalysts are also criticized for their promotion of the Fenton reactions (Fe2++H2O2), where dissolved Fe ions combine with H2O2, a by-product during the ORR in acids. Significant amount of active oxygen-containing hydroxyl and hydroperoxyl radicals are generated that can degrade to the ionomer within an electrode and a polymer membrane in PEMFCs. We hypothesize that the most important factor to benefit for the stability enhancement is a relatively high degree of graphitization that is vital for enhancing the corrosion-resistance of the carbon in catalysts. A robust M-Nx coordination obtained by a proper approach will improve the intrinsic stability of active sites of the catalyst.

To address this serious stability issue, we have designed more stable PGM-free catalysts. In our previous research, we discovered that Mn doping promotes the stability of nanocarbon catalysts and that Mn species catalyzes graphitic structures during the carbonization process of catalyst precursors. Importantly, Fenton reactions involving Mn ions are insignificant because of the weak reactivity between Mn and H2O2. Thus, we performed a DFT calculation to study the ORR activity and stability on possible Mn-Nx-Cy active site. The result indicates that MnN4 moieties embedded in carbon possess comparable activity and enhanced stability relative to state-of-the-art FeN4 sites. Inspired by these experimental and theoretical results, we pursue the Mn-based catalysts to achieve enhanced catalyst activity and stability. However, a grand challenge is to effectively increase the density of MnN4 active sites atomically dispersed into carbon (due to Mn atoms tending to form unstable and inactive crystalline compounds during the heat treatment).

After experiencing failures and negative outcomes, we have explored a two-step doping-adsorption method that effectively increases the density of MnN4 active sites step-by-step without the formation of clusters. The atomically dispersed MnN4 moieties were verified by X-ray absorption spectroscopy and aberration-corrected electron microscopy with atomic resolution. The Mn-N-C catalyst showed very encouraging activity, close to that of Fe-N-C catalysts, along with significantly enhanced stability in acidic media. The effectiveness of the Mn-N-C catalyst as a PGM-free cathode was also demonstrated in fuel cell tests. Controlled experiments proved that a unique porous structure and nitrogen doping of carbon hosts are crucial for the resulting activity after the second step adsorption process. Future work will be focused on the fine-tune carbon microstructure and nitrogen doping to further increase the activity and stability of the Mn-N-C catalysts.

All the details of our work can be read in our article: “Atomically Dispersed Manganese Catalysts for Oxygen Reduction in Proton Exchange Membrane Fuel Cells” in Nature Catalysis. https://doi.org/10.1038/s41929-018-0164-8

University at Buffalo, The State University of New York. 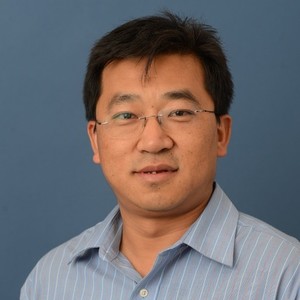