Chemistry in retrospect: True Grit and the path to a faculty position

As students and postdocs worldwide gear up for the start of graduate school, a new postdoc, or the beginnings of a long (and often stressful) search for a permanent position, Markus Ribbe reflects on his career path in order to remind us that things often don’t go the way you expect — but that doesn’t mean that things can’t end up better than you could have imagined.

Nearly 20 years ago, I was sitting on a plane from Munich to John Wayne Airport in southern California. I was on my way to a postdoc position in the research group of Barbara Burgess at the University of California, Irvine. Other than being interested in Barbara’s line of research, I did not know what to expect from this new life far, far away from my small hometown in Bavaria — in fact, I had no idea where I was heading to. As a former weightlifter, I was certainly excited to move a lot closer to Venice Beach, the residency of Arnold Schwarzenegger and the undisputed mecca of my sport. However, my enthusiasm was mixed with trepidation that Irvine was just a ranch in an area with nothing but cattle, a fear supported by a friend’s internet research. Instead of a herd of cattle greeting me at the airport, it was an oversized statue of John Wayne — a former resident of Orange County. At this point, it seemed strange to me that an airport in southern California should be named after a movie star other than Arnold, and that this movie star even deserved a statue of that size. This reaction was probably natural for a clueless postdoc who just arrived with nothing else but a small, half-empty suitcase and very little knowledge about life in SoCal. Little did I know that the statue of John “the Duke” Wayne would have a major impact on my life and career many years later. 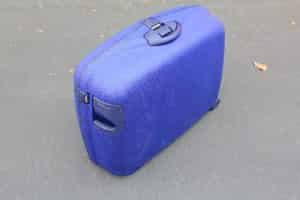 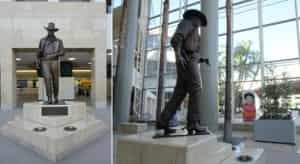 In the first couple of years after my arrival, I quickly got used to the local lifestyle and, despite the limitation of my all-inclusive, three-word vocabulary (“cool” for something that was good, “stink” for something that was not so good, and “unbelievable” for something that I could not quite put my finger on), I was able to express myself well enough to get around without a problem. My research in Barbara’s lab went smoothly as well. I have fond memories of those long protein-purification days that gave me grams of air-sensitive nitrogenase proteins, the dark brown colors proving that those proteins were alive and well, the nerve-wrecking experience when we accidentally soaked the last piece of crystal that had taken two years to form in the wrong buffer — and the spirit-lifting moment when we found out that the crystal had survived the savage treatment and diffracted well on the beamline. These dedicated days at work led to some good publications and, although life as a postdoc was somewhat monotonous, I started to realize that Irvine was a really cool place with lots of sunshine, great cultural diversity and a much livelier lifestyle than the quiet little town I grew up in. The fact that I met my future wife there, Yilin, who’d started her postdoc position in Barbara’s lab a bit later than I did, certainly helped me get truly comfortable in SoCal.

Things took an unexpected turn, however, when Barbara tragically took her own life. This really affected us, and apart from the personal implications of her sudden disappearance, life became harder, and the future seemed uncertain. Then, one day, out of the blue, Jerry Manning, our department chair at that time, came and asked me if I would be interested in applying for my own NIH grant with support from the school in order to continue doing research on nitrogenase. Affected by the unmatched positive personality of Jerry — the coolest chair one could ever ask for — I responded: “Sure! How difficult can it be to get an R01?” My reaction at this point certainly proved that one of John Wayne’s famous lines, “life is tough, but it’s tougher if you’re stupid”, should be rephrased as “life is tough, but it’s much EASIER if you’re ignorant and stupid”. Had I known how tough it would be to get an R01 grant for a PI-less postdoc without a faculty position, I would have promptly looked for other opportunities.

Well, fueled by blind enthusiasm, I wrote my first R01 together with Yilin, submitted it to our study section in the National Institute of General Medical Sciences (NIGMS), and anxiously waited for the verdict. The reality started to sink in when we saw the score of our grant. Although the proposal received a rather decent score, it was sitting right on the funding line, and we would need to submit a revised proposal to improve the score. So we did. Twice. Several months passed by, the remaining funds of the late Barbara Burgess that had helped us through were exhausted, and our hopes for getting the grant funded became faint. We were seriously looking into other options and job opportunities, even overseas. Then, a dramatic turn of events changed our fate. On a typical sunny morning in SoCal, I received a phone call from our NIH program officer, Dr. Peter Preusch, who informed me that our proposal was funded by NIGMS. I must have annoyed Peter ever so slightly by repeatedly asking him if he was joking. Fifteen years later, this NIH-funded project on nitrogenase assembly is still the backbone of our research program, something that would not have been possible without the support of the good people on the NIH study section.

Life was good again now that we had our own funding to go on for a while, and the next step was to land a faculty position. Continuing in the theme of “ignorance is bliss”, I started to apply for tenure-track faculty positions in a number of universities, including some not-to-be-named top-tier schools. Naturally, I received response letters with comments like “we have to regretfully inform you that you are not in the circle of our elite candidates”. Unfazed by these setbacks, I continued to apply and was interviewed by several schools, riding on my motto that “the worst that can happen is they say no, but nothing will happen if you don’t try”. Then, a golden opportunity popped up when UC Irvine advertised for two assistant professor positions in biochemistry. I was ecstatic because both Yilin and I had grown more and more attached to SoCal, and getting these positions would allow us to stay in the area we loved. Things didn’t run smoothly, however, when I applied for the position at Irvine the first time around. I was only ranked third among all the candidates and, although the school intended to fill two positions, I was not offered the job even after the second candidate turned down the offer. The next year, the position was advertised again and, you guessed it, I applied again despite hearing discouraging comments like “do you really want to go through the embarrassment of getting turned down by the school again?”  Learning from mistakes I made in the previous interviews, I focused my effort on convincing the Irvine people that they would not regret offering me the job. And they did, finally! Thinking back, persistence, opportunity and good people were the keys to my success in landing this job. My appointment in Irvine would not have solidified without the support of faculty members like Jerry Manning, Tom Lane and Tony James in our department.

From the time I was appointed as a faculty member in UC Irvine, I have had an incredible streak of good luck to work with Yilin, as well as outstanding graduate students Chi Chung, Aaron and Jared in the lab, and our great collaborators in the field. Their hard work has led to exciting discoveries, such as the reduction of carbon monoxide to hydrocarbons by nitrogenase and the radical-SAM dependent insertion of carbide into the center of the nitrogenase cofactor. Some of these stories were published in top-tier journals including Science and PNAS and caught the attention of several German universities. A series of events followed, with the aim to recruit me back to Germany. Suddenly, I found myself traveling frequently in the opposite direction of that when I came to the United States, and I quickly became a 1K member with the United Airlines.

The climax of these recruiting events was an offer for me to return to my home country as an Alexander von Humboldt Professor, one of the biggest scientific honors one could receive in Germany. The offer included a substantial start-up package and a number of house positions for scientists and staff at the host university.  What was even more tempting for us was that it was combined with a tenured faculty position for Yilin.  Attracted by this once-in-a-career opportunity, we were pretty much all set to move to Germany and were already looking for a house.

But then, unexpectedly, we had a sudden change of heart during one of the seal-the-deal trips between the two countries. Despite the charm of Germany, with each trip we found that more and more we looked forward to returning home in SoCal, and our frustration grew over the thought of moving somewhere far, far away from the place we had become attached to. Eventually, one day, arriving at the Orange County Airport from another trip to Germany, I stopped in front of John Wayne’s statue — basking in the sun with palm trees in the backdrop — and thought to myself “This is really cool! What are you doing, and why do you want to leave all this behind?” Something that looked strange to me 20 years ago felt really good all of a sudden, and, well, the rest is history. We traded an incredible offer from Germany for the lifestyle and career path in SoCal. We stayed and Yilin started a tenure-track faculty position in UC Irvine a few years ago. Work has been exciting in our labs, with a number of outstanding postdocs and graduate students continuing our traditional line of research on nitrogenase assembly and function and moving toward new directions of generating artificial iron-sulfur enzymes. Life is great here, and somehow I can’t help feeling that John Wayne has something to do with it.

Markus Ribbe is the Chancellor’s Professor in the Departments of Molecular Biology & Biochemistry and Chemistry at University of California, Irvine