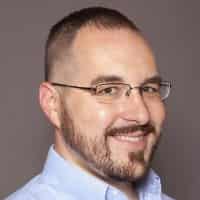 Mike Tarselli works in the Information Systems division of the Novartis Institutes for BioMedical Research (NIBR) in Cambridge, MA. His projects there involve data management for external science and synthetic biology, while managing a global team of informaticians, web developers, and business analysts.

Mike was originally interviewed on Reactions in May 2013; this past summer he contributed to an interesting paper in J. Med. Chem entitled “Big Data from Pharmaceutical Patents: A Computational Analysis of Medicinal Chemists’ Bread and Butter.”

Given the change in his research focus, we thought we would check in and see what Mike’s up to in his new role.

1. How has your job changed since you last appeared on Reactions?

Let’s see: New city, new company, new tasks, new projects, and new colleagues. I went from a small start-up focused on neuroprotection to the informatics division of a large pharmaceutical company investigating multiple disease areas. The common thread tying together my past few jobs would be understanding and anticipating chemists’ needs, predicting how chemistry will evolve, and communicating change to different stakeholder groups.

2. What do you think is the most important aspect of your work?

Scientific business analysis is a relatively new title for a rather old pursuit – taking the 10,000-foot view on scientific workflows, and asking questions like: “How can we streamline this process?” or “What’s the end goal for this group’s data?” If I’ve done my work well, scientists make faster, better decisions on higher-quality data, saving us all time and resources. I remain grateful that my role also allows for occasional original research questions, which we’ve pursued recently in the areas of green chemistry and patent mining.

3. Which is your favourite element — or if not an element, favourite molecule and why?

I couldn’t pick an absolute favourite, so I’ll give you three molecules: artemisinin, curcumin, and conolidine. Artemisinin, the recent recipient (2015, Tu Youyou) of a Nobel Prize, helps treat malaria for millions of people. It contains a remarkable endoperoxide (C–O–O–C) group thought to result from photo-oxidation of O2. Curcumin, a pigment found in curry and turmeric, conjugates to free thiols and amines in the cytoplasm through double Michael addition, which may have roles in apoptosis. Finally I first synthesized conolidine as a postdoctoral fellow; this subsequently became my first peer-reviewed publication in Nature Chemistry. Conolidine’s observed benefit — non-opioid pain reduction — remains important in a world awash in widely available, addictive painkillers.

4. Imagine that your inbox is empty, there is nothing in need of writing, and there are no experiments that need attention: how would you spend this free time?

As recommended by many great scholars, I’d take a walk. I’m amazed how much light exercise, a welcome distraction from the glowing screens and impending deadlines of modern science, clears one’s head and improves critical thinking. For maximum benefit, I’d probably drop into one of the many fine local cafes Cambridge proudly hosts, and walk out a bit more lively after a dry cappuccino.

5. If you were given $1 million as you stepped out of your office to do with what you will, what would you use it for?

A lifelong dream to endow a scholarship comes to mind — I’d contact my high school and university and ask how we could structure something for scientists like me: without much familial financial support, but showing the passion to help people and make the world a better place. Donations to Wikipedia, independent radio, and public parks might follow. If I have any of the million left over, I’d re-enroll in a continuing education program to learn a new language or pick up some business classes. Just for fun, let’s throw in a big meal with my friends and family.

6. Where would you most like to travel to, but have never been — and why?

Uh-oh, I think I could spend the rest of the post just answering this single question! Argentina would give me a chance to brush up on my Spanish language skills, while riding a horse across the Pampas. For a complete contrast, Iceland would show me the Northern lights (aurora borealis) and a chance to relax in the volcanic hot springs. I’m drawn, finally, to Shanghai, China, because I want to see such a city during its major growth phase – the number of skyscrapers built there in just the past decade rivals New York or Hong Kong during the 20th century. I’d appreciate the chance to visit the Shanghai Institute of Organic Chemistry, from which I’ve seen many important papers emerge.

7. Which chemists do you look up to, living or otherwise — and why?

This post may show the reader that I’m terrible at selecting absolutes. Thus, two more…

Carl Djerassi made his mark as a chemist, inventor, entrepreneur, and playwright. He constantly reinvented himself, whether at Syntex, Stanford, or in writers’ groups, and possessed an amazing work ethic and strong opinions. From him, I draw lessons about self-reliance and confidence.

On a completely different tack, I learned an important lesson once in a passing interaction with Harvard chemist Eric Jacobsen. He presented a seminar at one of my first pharmaceutical jobs, with the former Millennium Pharmaceuticals. Eric made a request I thought strange: he wanted to meet only with the bench chemists for lunch. Once the door was shut, he asked only “How do they treat you here? Are you happy?” to myself and a handful of other young scientists. And then he listened intently and delivered sage responses where appropriate. From him, I learned that you could be a warm, compassionate leader, and still deliver amazing science.