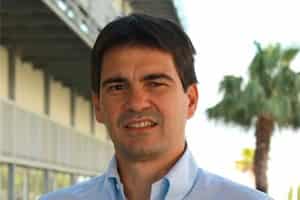 Paolo Melchiorre is an ICREA Research Professor and a Group Leader at the Institute of Chemical Research of Catalonia (ICIQ), Tarragona (Spain). He works on the discovery and mechanistic elucidation of enantioselective organocatalytic and photochemical processes. Paolo recently published a paper in Nature Chemistry entitled “Visible-light excitation of iminium ions enables the enantioselective catalytic ß-alkylation of enals.”

My father is a medical chemist (now retired) — I guess the fact that his colleagues/friends were often around during my childhood might have had something to do with my decision to study chemistry. As for innate propensity, I was always curious about natural phenomena, their mechanisms and meanings.

Any activity related to freedom and exploration. But I’ve always liked sports and, when I was a child, I would have loved to have become a sportscaster.

We are exploring the reactivity of chiral organocatalytic intermediates upon light excitation. An electronically excited state can unlock reaction pathways that aren’t available to conventional ground-state chemistry. So combining enantioselective organocatalysis with photochemistry can offer unconventional ways of making chiral molecules. We believe that this approach will not be limited to organocatalysis, but could be applied to other areas of modern synthetic chemistry.

It is really hard to choose only one! There are so many historical figures with whom I would love to have dinner: from Julius Caesar and Charles Darwin, to Copernicus, Primo Levi, and Marie Curie. But probably my final choice would be Leonardo da Vinci, a real man of the future – I could even use Italian to talk with him and try to understand how a genius thinks.

A long time ago, in 2010. It was the very beginning of our studies on photochemistry, and I performed a reaction that required UV irradiation. As a light source, I used the UV lamp that was generally used in the lab for thin-layer chromatography visualization. Incredibly, the reaction worked a bit.

La Divina Commedia – a long time has passed since I read it at school, and it would be long enough to keep me busy and thinking for a while. As for the music, Radiohead’s full discography, but only if I am alone. Otherwise, my wife and kids would destroy it.

Ryan Gilmour and Dieter Seebach. I believe the former will strongly influence Europe’s organic chemistry community; the latter has profoundly done so.