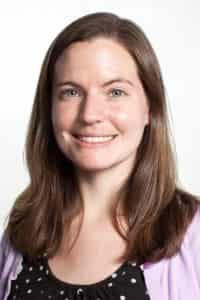 Rachel Whittaker is an Assistant Professor in the Department of Chemistry at Murray State University, and works on iron dioxygenase mimics and other iron-catalyzed transformations.

I entered college as a Biochemistry major with every intention of going to medical school. My sophomore year, I had the opportunity to teach as a teaching assistant and take organic chemistry. I loved both so much that I changed my plans and went to graduate school instead.

I would probably be a bed and breakfast owner. It just seems like the world’s best job; meeting new people and baking are both great fun.

Eleanor Roosevelt. She was so interesting and led such an extraordinary life. I’d love to hear her opinion and perspective on basically everything.

Yesterday. As a new assistant professor, I spend a lot of time in the lab. I ran a simple  ketone reduction.

I would bring some sort of carpentry book; I have always been interested in learning to build things, but never had the time. Plus, it would come in handy. As for the album, I would take In Between Dreams by Jack Johnson, since it’s the beach.

My former colleague, Xu Tao. I’m sure his answers would be interesting and hilarious.