Another four bricks in the wall (part II)


Editor’s note: this post written by Shawn Burdette and Brett Thornton is a companion piece to the Commentary article ‘Another four bricks in the wall‘ published in the April 2016 issue of Nature Chemistry.

If discovering and naming new elements was not complex enough, the discoverers must also propose a two-letter symbol. For reasons that are presumably related to adherence to tradition and historical precedent, IUPAC guidelines require two-letter symbols for new elements, with the first letter capitalized and the second lowercase. Although that sounds simple, in reality, finding a suitable symbol for a new element can be nearly as tricky as selecting a name.

Most of the figures for the commentary on the 4 new elements required making educated guesses about what element symbols would correspond with the hypothetical names. Element symbols, like element names, follow an arcane set of rules. Symbols that have been used in the past, but abandoned, may not be reused. Since there are only 114 named elements, some using single-letter symbols, and 26 × 26 = 676 possible two-letter combinations, there initially appears to be lots of available symbols to choose from. Upon further inspection though, problems start to arise.

Part of this symbol problem arises from most element names coming from Indo-European languages, and principally Germanic and Latin languages, which share many common phonemes. Put another way, there are limited numbers of ways to put together letters in English that make sense, and some letters appear far more frequently in element symbols than others – see the chart below: 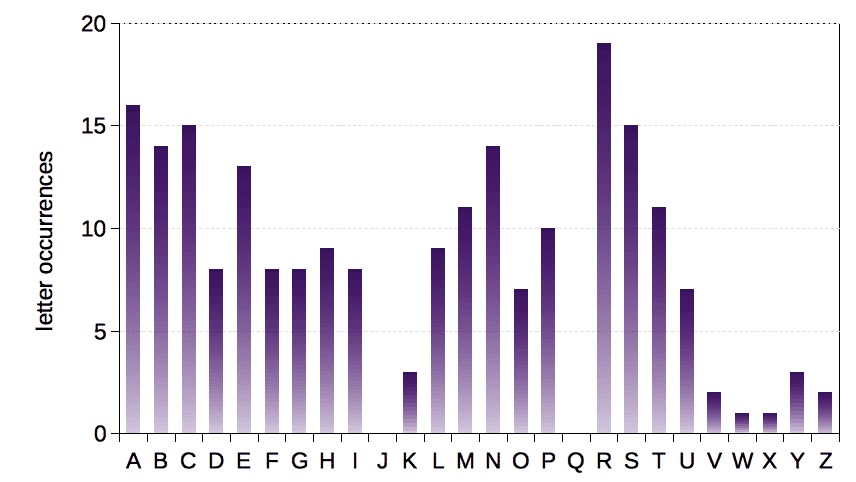 Letter occurrence frequency in the first 114 assigned element symbols as of March 2016.

As more and more elements are added to the table, choosing ‘valid’ symbols becomes more difficult. In the case of copernicium, researchers originally proposed the symbol ‘Cp’. As was pointed out in a letter to Nature, Cp previously had been used to denote ‘cassiopium’, a competing name for lutetium in the early 1900s that had appeared on periodic tables. IUPAC ultimately changed the symbol to ‘Cn’ to prevent confusion. Astute readers will recognize that Cp is also used to abbreviate cyclopentadienyl anion, however, none of the IUPAC documents list this as a potential issue. Others have pointed out that Cn was the symbol for ‘coronium’, a widely discussed element in the late 1800s and early 1900s. Coronium, which turned out to be highly ionized iron in the solar spectrum, was never placed on the periodic table. Perhaps the restriction on reusing a symbol need not apply if the element was never assigned a spot.

The illustration for ‘japonium’, our guess for element 113, uses the symbol ‘Ja’. Using the first 2 letters of the proposed name was as an easy derivation because no other element symbol contains the letter ‘J’. If we had guessed ‘nipponium’ however, there would be a dilemma. The single letter ‘N’ is taken by nitrogen. Ni is nickel, Np is neptunium, No is nobelium, so the first combination that is unclaimed is ‘Nn’. There are no double-letter element symbols, so while this might look odd, there are no IUPAC restrictions that would prevent this combination. Alternatively, it would be a clever maneuver to integrate the more familiar exonym ‘Japan’ with the Japanese name for their country and propose Ja as the symbol for nipponium. There is certainly precedence for unmatched chemical symbols. Na and Ag for sodium and silver, from the Latin names natrium and argentum, for instance. However, using symbols from another language has not been applied to newly discovered elements since the early 1800s, unless one counts the long fight over W for tungsten.

In the illustration for ‘moscovium’, a similar problem arises. Mo is molybdenum, so ‘Ms’ would be next in line. Unfortunately, Ms is a common organic chemistry abbreviation for the mesyl functional group (methylsulfonyl), though it’s unclear if this would be an obstacle to the symbol. In the event that organic abbreviations are deemed problematic, ‘Mc’ would be the next choice. Mv was widely used as a symbol for mendelevium before Md was adopted as the official symbol (ref. 1), and therefore would be unlikely.

Likewise, Te is taken by tellurium, so ‘tennessine’ could be ‘Tn’. Until the mid-20th century though, IUPAC defined Tn as the symbol for the 220Rn isotope, a use that persists in current literature. ‘Ts’, the other possible symbol, is the abbreviation in organic chemistry for tosyl groups (p-toluenesulfonyl). This poses a quandary if tennessine is the chosen name for element 117; all the obvious symbols derived from letters in the name might be off limits. If single-letter symbols were resurrected, ‘T’ might work, except tritium uses that letter as a chemical symbol.

There are 14 single-letter symbols (H, B, C, N, O, F, P, S, K, V, Y, I, W, and U). That might suggest that 12 are still available for new elements, but some have already been taken. D and T, as mentioned above, are deuterium and tritium respectively. G was ‘glucinium’, a competing name for beryllium. ‘A’ was an early symbol for argon before it was changed to Ar (ref. 1). When einsteinium was named in the 1950s, the original symbol proposed was ‘E’, but this was changed by IUPAC to Es (ref. 1). ‘M’ is often any generic metal in chemical equations. ‘X’ is any halogen. ‘R’ is an organic functional group. ‘J’ is commonly used for iodine in German-speaking countries. By process of elimination with a 26 letter alphabet, that leaves only L, Q, and Z as unclaimed single-letters.

Ultimately, we guessed Tn for tennessine to agree with the postal code and familiar abbreviation of the state. IUPAC however might prefer Ts because the abbreviation for tosyl is less well-defined by IUPAC than Tn was for thoron.

In the illustration for ‘octarine’, the symbol ‘Oc’ was an easy selection since the only other ‘O’ elements are O (oxygen) and Os (osmium). Although the illustration of scientists doesn’t include symbols, we can still speculate about what might be chosen for these hypothetical element names. ‘Ghiorsium’ could easily claim ‘Gh’ as only germanium (Ge) and gallium (Ga) use the letter ‘G’. For moseleyon, or any element named for Henry Mosley, ‘Ml’ or ‘My’ have to be selected since Mo already belongs to molybdenum, Ms has the complications already discussed for moscovium, and Me is the common abbreviation for methyl. William Ramsay’s namesake ramsayon, would likely use ‘Rm’, ‘Rs’, or ‘Ry’ after passing over the already claimed Ra, which is used by radon. As with japonium, Jo and Jl are theoretically open for ‘joline’ since there are no ‘J’ elements; however, joliotium was suggested for element 102 (now nobelium) with the proposed symbol Jo in the late 1950s, and Jl for element 105 (now dubnium) by IUPAC in 1994. Would a ban on reusing symbols lead to Ji, Jn or Je being preferred?

While symbol speculation might not have the allure of guessing the actual name of an element, the ultimate choice is no less important. The chemical symbol is the ‘face of the franchise’ for each element; though element names may vary between languages, the symbols are universal. The initial encounter with an element for chemistry students is as likely to be the symbol as the name. So perhaps it’s not surprising, that at times, the choice of chemical symbol has been as controversial as the name itself. Well, almost as controversial.