New kids on the p-block


Editor’s note: this is a guest blog post from Philip Ball, Shawn Burdette, Kat Day, Eric Scerri and Brett Thornton about those four new elements and what they might/should/could be called. We’d like you to get involved too, so please do comment!

On December 30, 2015, IUPAC (the International Union of Pure and Applied Chemistry) announced the confirmation of the experiments that produced elements 113, 115, 117, and 118, which completes the 7th row of the periodic table. The corresponding technical reports on the confirmations are available ahead of print online (here and here). The announcement created a great deal of excitement not only in the scientific community but also in the public, and touched off a wave of speculation about what the new elements will be named. IUPAC guidelines authorize the original discoverers to suggest an element name, and revisions to the rules propose several modifications including what form the suffixes of elements in group 17 and 18 should take. After the names have been submitted, IUPAC will sanction the names after a period for public comment. The IUPAC guidelines permit an element to be “named after a mythological concept, a mineral, a place or country, a property or a scientist”.

Except for a press release from the Joint Institute for Nuclear Research (JINR) on element 115 (available here) and Riken on element 113 (see page 16 of this pdf document), the research groups have been silent on what names might be submitted for IUPAC approval. Proposals for names have come in from a variety of quarters including several internet petitions on change.org. With all the suggestions and speculation, we thought it would be fun to try and guess what the researchers actually will propose to IUPAC. So we assembled a panel of experts that included freelance science writer Philip Ball, Worcester Polytechnic Institute professor of chemistry and biochemistry Shawn Burdette, chemistry blogger Kat Day, UCLA lecturer and author of several books on the periodic table Eric Scerri, and Stockholm University atmospheric chemistry researcher Brett Thornton. The panel brainstormed a list of ideas consistent with the IUPAC guidelines, as well as historical trends in element nomenclature. The panel also examined the names being put forward elsewhere. The list is compiled below (click on the table for bigger version) and includes odds on the likelihood that each name will be proposed to IUPAC (e.g., 1/2 odds corresponds to a 67% probability and 2/1 odds implies a 33%). 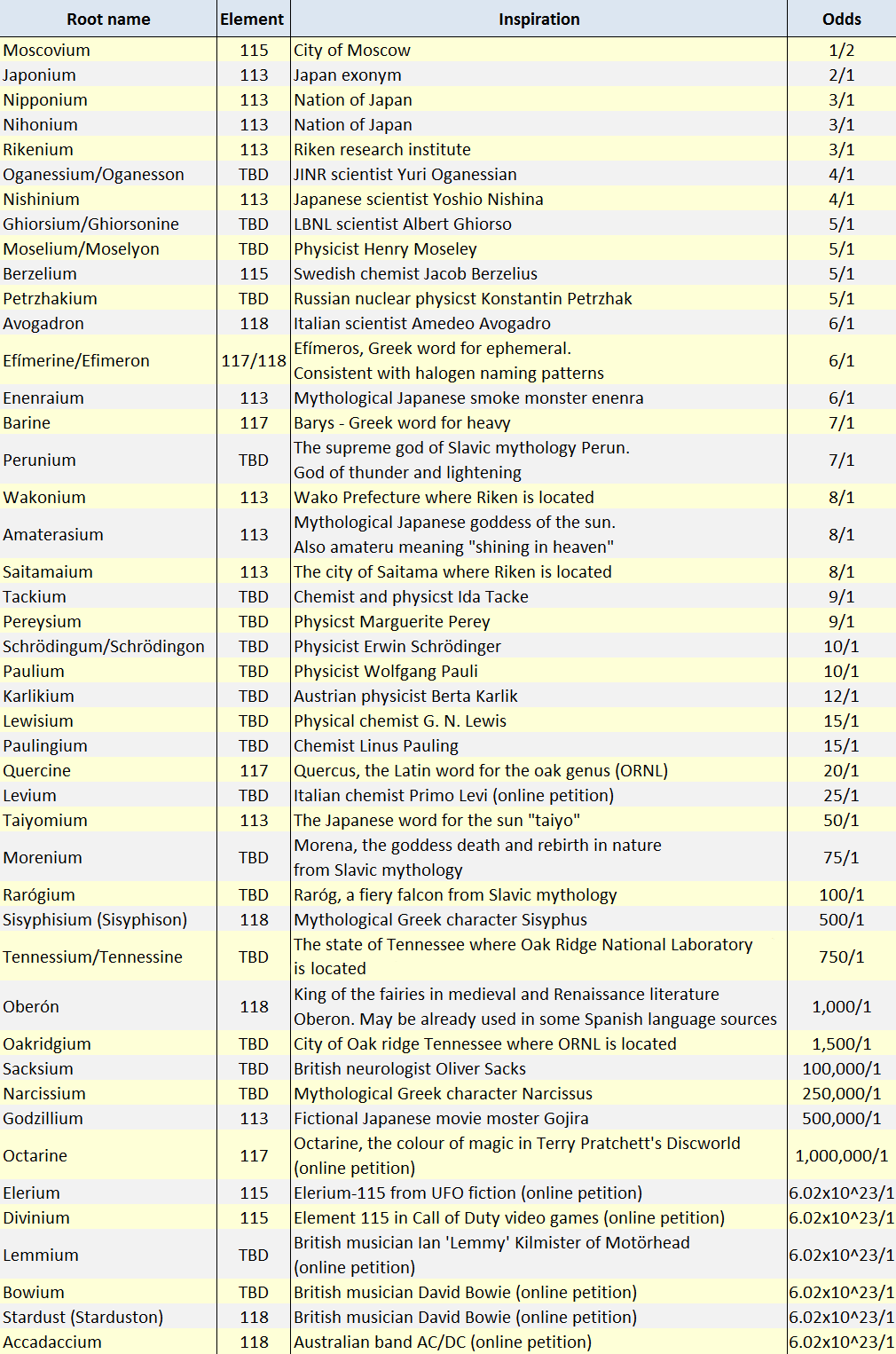 Based on the proposed names, each member of the panel has made a pick for each of the new elements. If we were actually gambling, picking a longshot name, while less probable would provide a bigger payout if correct. This would be how things work in a typical sports book; however, these picks are being made just for fun (click on the table for bigger version).

The process of how the names were selected, the significance of the names, how the odds were determined, and why each panelist made their picks, will be the subject of a Commentary in an upcoming issue of Nature Chemistry. Since we don’t know the timetable on which names will be proposed, we wanted to initiate the project with this post on the Sceptical Chymist. This also gives you the opportunity to make picks of what name the researchers will submit to IUPAC. Did the panel miss a name that the researchers at RIKEN, the JINR, Lawrence Livermore National Laboratory (LLNL) or Oak Ridge National Laboratory (ORNL) might be considering? It has also been suggested that the discovery groups might want to consult with the research teams involved in the experiments that replicated their discoveries. Will they be consulted, and are there other names those researchers might advocate? The discovery team who created copernicium listened to public suggestions, will these research teams? Should they? Give us your picks as well as any suggestions for possibilities we omitted below. Remember IUPAC guidelines require elements to have names derived from mythology, minerals, places, properties or scientists. Make sure to identify yourself so we can credit you in the Commentary if we discuss your ideas.