How to write an editorial (in tweets)


Today we published an Editorial describing how Nature Chemistry (@NatureChemistry) has used Twitter over the past 4 years. The topic of the Editorial was something I had been mulling over for a while, but the format is something that wasn’t planned until I sat down to write it. An Editorial about Twitter? Well, why not write it in a series of tweets (some team members even joked about doing it this way before I sat down to write the thing)? As it turns out, I couldn’t resist the challenge…

And what were the challenges exactly? Well, each tweet (including any mentions or links) obviously had to be 140 characters or fewer. That was a rule that couldn’t be broken. Other considerations were a little more subtle: I wanted each tweet to more-or-less stand alone and make sense in its own right. Typically an Editorial has a main theme that builds and builds as you read it, and the writer can usually depend on the reader remembering what they read in the previous sentence or paragraph to put the current point in context. That wasn’t the case here, yet I did want the Editorial to flow — well, as much as 42 individual statements can…

Another concern was repetition; I didn’t want each tweet to start with ‘We use Twitter to…’ — something that would have been so easy to do (but would have been so boring to read). And while the Editorial does use the words ‘Twitter’ and ‘tweet’ quite a bit, that was pretty much unavoidable. The final challenge, and it might seem ridiculous considering the topic, was for the Editorial to fill one printed page in the journal. Yep, a printed page. Filled. With tweets. Before writing this particular Editorial, I looked at previous examples in the journal and came up with a rough estimate of the number of tweets that it would take to fill a page. 40-45 looked like the magic number, and it would be better to write more and cut later, rather than shoehorn new ones in at a later stage. Once it became clear that the final figure might be 42, there was an opportunity (well, compulsion) to finish with a reference to Douglas Adams.

It’s worth mentioning the time scale on which Editorials are written for the journal. Today — the day the Editorial was published — is March 20th. Content for our April issue had to be finalized for ‘press day’ — the day the final PDFs get made up and sent off to the printers; that was March 6th. The date by which the Editorial had to be given to the production team for copy-editing and layout was March 1st. Working back from that, I wanted to make sure that my team had plenty of time to tell me just what a bad idea this was and that I should just write a normal editorial and so, with that in mind, the first draft was written on the weekend of 16/17th February (yep, a weekend, for those paying attention). So, that’s more than one month between putting pen to paper (fingers to keyboard) and the date of publication. That explains some of the date ranges given in the Editorial and why some of the numbers that are quoted will have changed if you look them up now. 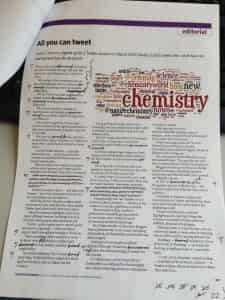 The version that was handed over to our production team consisted of a title, standfirst, Wordle, and 42 tweets in the main body of the article. It turned out to be 22 lines too long. Ouch. Look at the picture of the proof to see what needed to be done to cut it down to size. 4-line tweets were cut to 3 and a couple of tweets were removed completely. Click through to the larger version of the image to see exactly what changes were made. And it was on the second page so you can’t see it, but #overlyhonestmethods had to be cut from the hashtag tweet (it didn’t play nice with line breaks).

The ’42’ ending still works; one tweet for the title, one for the standfirst and 40 for the main text (you could argue that the original version was actually 44 tweets and the published one is genuinely 42 tweets in total). We still had problems with orphans and widows in the pdf version, so we shifted some of the tweets around. If you compare the proof to the published version (and you care that much) you can figure out what was moved where. Yes, it’s somewhat bizarre that an Editorial about how we use a web 2.0 tool is dictated — to some extent — by old-fashioned typesetting issues, but there you go.

Once the Editorial was finalized and it was too late to make changes, other examples of how we use Twitter obviously sprang to mind. It’s not just the one book review that came about because of interactions on Twitter. Declan Fleming (@declanfleming) reviewed Itch for us (review here; subscription required) after I contacted him about it through Twitter and after getting to know Jamie Gallagher (@JamieBGall) on Twitter, we asked him to review the 2012 Royal Institution Christmas Lectures for us — (review here; subscription required).

The intention from the beginning was to tweet the whole thing, as we did today — and that’s the first (and probably the last) time we’ll do something like this. We hope you enjoyed it, or at least found it interesting!