Synchronous behavior is widely observed in nature from firefly flashing in animals(1), sounds of hands clapping in human(2), heart and neural rhythm in biology(3,4) to nonmechanical oscillators(5,6) in the physics, but has not been directly observed at the molecular level.  Our team, consisting of researchers from more than six countries and eleven laboratories in the USA and Germany, illustrates the spatiotemporal synchronous behavior of several millions of RNA molecules in crystalline states. The effort started from the initial intriguing observation of the solid-to-solid phase transition (SSPT) after diffusing ligand into riboswitch RNA crystals(7).   The riboswitch RNA is an interesting molecule. In bacterial cells, it regulates gene expression patterns by changing its conformation after binding to ligand.  The SSPT is triggered by the conformational change, resulting in re-arrangement of ordered patterns in crystal.  The question then became how the transition between the two ordered phases could happen.  By conventional wisdom, SSPT may go through a liquid disordered phase during the transition.  However, the direct visualization using polarized video microscopy (PVM) shows no liquid phase observed throughout the process, thus excludes the possibility.  We then hypothesize that SSPT must occur in synchrony, where several millions of RNA act in unison during the transition.  However, the proof for this is not easy and must be direct observation at the molecular and atomic levels.  The best techniques are time-lapsed atomic force microscopy (tlAFM) and X-ray free electron laser (XFEL).  tlAFM captured the phase transition under a reduced ligand concentration to 150 mM, where the SSPT is slow enough to record tlAFM with sufficient spatiotemporal resolution.  The tlAFM images again show the RNA molecules are never in a disordered phase and maintain lattice orders throughout the transition.  The lattice parameters (a,b,c and a,b,g) derived from tlAFM images clearly reveal the precise time point of the transition and the ordered lattice re-arrangements during the process.  While the tlAFM shows the ordered transition in a single crystal, the question then became if it is also the case for other crystals.  We then analyzed the time-resolved X-ray diffraction patterns of more than 170k crystals recorded at the XFEL at LCLS (Melo Park, CA) and show that the ordered transition is occurring in all examined crystals, with derived lattice parameters consistent with those from the tlAFM experiments.  Moreover, the time-resolved crystallography (TRX) also reveals the nature and mechanism of the SSPT.  The synchronous motions of several millions of RNA molecules moving in unison can be metaphorically described using the choreography of synchronized swimmers (Video 1).

Why the synchronous phase transition matters?  One of the immediate implications is that it is feasible to record molecular movies of systems with large conformational changes using an XFEL and micro/nanocrystals.  Furthermore, it is the first time that the synchronous SSPT is seen at molecular in any materials to our knowledge.  Before our study, SSPT is discussed mostly through the prism of the first or second-order transition according to the proposal of Ehrenfest (8-11).  Our results shed some light on the debate. 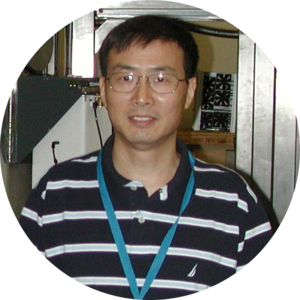